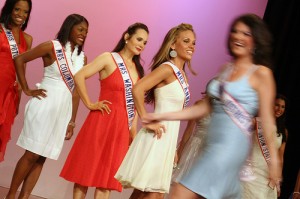 “When I was growing up, Miss America was the symbol of what every young girl wanted to be,” author Alix Kates Shulman, one of the organizers of the first Miss America protest in 1968, said in an interview with NPR in 2008. “That was the kind of attainment that everybody yearned for, to be considered beautiful. There was nothing else. That was the biggest thing.”

Fortunately for young girls today, that is no longer true; our dreams for the future aren’t limited to just walking in high heels while wearing a bathing suit, or talking about world peace while modeling an evening gown. Miss America is still around, though, chugging along despite low ratings and channel-jumping. The love-to-hate contest is back on ABC this Saturday, January 15, still objectifying women, albeit in a 21st century sort of way.

Forty-three years ago, 400 budding feminist women stormed the Atlantic City boardwalk to protest Miss America. Jacqui Ceballos, the founder and President of Veteran Feminists of America explained why in 2009:

That whole idea of that Miss America who got up on the stage and said, “All I want to be is a wife and mother.” It just got to me.

That irritation inspired an action that made headlines, caused Pepsi to drop its sponsorship of the pageant and has come to be known as one of the launching points of the Women’s Liberation movement of the era. That infamous stereotype of bra-burning feminists? It came from that protest, even though it wasn’t true. The manifesto titled “No More Miss America,” written by the protesters, has been canonized in the field of women studies. Feminism and the Miss America pageant share a history, albeit a tumultuous one.

So why have we abandoned the good fight against the pageant?

Perhaps it’s because it’s had to change in response to the growing role of feminism in American society. The contestants began to reflect the new understanding of a woman’s role—instead of dreaming of motherhood and housewivery, contestants “were increasingly turning their attention to professional goals.”

In the last 20 years, the pageant has decreased the importance of the swimsuit score in the overall competition; banned professional hairdressers and makeup artists from the pageant; stopped announcing contestants’ breast, waist and hip measurements; started requiring that contestants choose a social issue for their ‘personal platform’; and even ceased requiring that they wear high heels during the swimsuit segment.

Sam Haskell, chairman of the board of the Miss America Organization, further shields the modern pageant from the criticism of superficiality by explaining:

Our girls require community service and must have a talent. There’s also a requirement to be in college. And we make sure that every single one of our women leave with scholarship money.

The Miss America website is overflowing with phrases like “leading achievement program” and “largest provider of scholarship assistance for young women.” A notable fundraising ad reads, “Some call her a beauty queen, we call her a scholar.”

It seems as if the Miss America Organization is just as good as the pageant queens at hiding flaws or blemishes. No matter what the advertisements claim, the pageant hasn’t been around for the past 90 years because it puts very smart girls on a stage. It’s a beauty/femininity pageant with a pretty good prize, pure and simple.

Miss America still reflects many of the complaints that New York Radical Women made in their original brochure for the Atlantic City protest: The contestants “epitomize the roles we are all forced to play as women.” They must be “young, juicy [and] malleable.” Little girls who sit in front of their TV on Saturday night will be taught that “men are judged by their actions, women by their appearance.”

The Miss America pageant still implies that a rigidly stereotyped notion of “beauty,” the ability to put a few words together in a (semi-)coherent sentence and a “talent” are what a woman most needs to succeed. Robyn E. Blumner said it best in an article in 1999 for the St. Petersburg Times:

They want you to think the pageant … is a boon to modern womanhood, a feminist icon, and an equal opportunity benefactor.

The day a woman is crowned who resembles one of this country’s most accomplished never-marrieds, our attorney general, Miss Janet Reno [remember, this was during the Clinton administration], I’ll say they have a point. Until then, the pageant is just another location where fabulous-looking women get rewarded for looking that way. (As if there aren’t enough rewards.)

In one way, those protestors won: Miss America no longer holds a special place in our collective hearts and minds. But it’s a Pyrrhic victory. You still won’t see an average-sized woman anchoring the news or playing a doctor or cop on primetime TV. Instead of abandoning everything Miss America stands for, we’ve embraced it in everything from our celebrities to our politicians. Protesting the pageant would be futile now, because compared to all the other ways society objectifies women, Miss America seems benign.