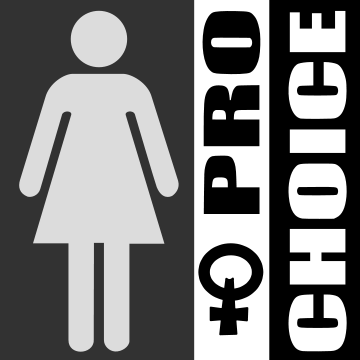 This is a very special week for feminist events because it marks the 38th anniversary of the oh-so-important Roe v. Wade decision. Roe v. Wade gave women the right to make choices about their own bodies–a right that women have not always had and that we will continue fighting to defend.

In college I went on kind of a date to a Roe v. Wade anniversary tea/pizza party. (I say “kind of” a date because at the time I didn’t really think it was, but later we ended up dating for real, so I’m retroactively considering it our first date.) We had a lovely time. Nothing better than tea and pizza and celebrating our rights. So, wherever you are, be it with tea and pizza or marching in the streets, celebrate our right to choose!

Los Angeles: Young Feminists Speak Out. In November, More magazine published an article entitled “What the New Feminists Look Like” (read here). A group of young feminists in Los Angeles have decided to keep the conversation going and have organized a panel and mixer. The evening begins with music and then a panel discussion, Q&A, and mixin’ and minglin’! January 20,  6:30 p.m. to 10:30 p.m. / Livity Outernational, 2401 Lincoln Blvd., Santa Monica.

Washington, D.C.: We are the Champions. Watch six young reproductive justice leaders go head to head … with words! Who will be the champion? January 20, 7 p.m. to 9 p.m. / Center for American Progress, 1333 H St. NW. RSVP here.

Little Rock, Ark.: Rally for Reproductive Justice. The Little Rock chapter of NOW, along with the ACLU of Arkansas, Planned Parenthood of Arkansas and Eastern Oklahoma, and the American Association of University Women, will host the first annual Rally for Reproductive Justice at the Arkansas State Capitol. This event was planned, in part, by a wonderful friend of mine who I’ve known since we were teenagers at summer camp, so if you go say hi to Stephanie for me! January 22, 1 p.m. to 4 p.m. / Arkansas State Capitol. RSVP on Facebook and invite friends.

Portland, Ore.: Chocolate for Choice! Holla at my hometown! Share some tasty delights and conversation with fellow fabulous feminists. Admission is $15 and includes two chocolates, hosted coffee and wine. I don’t know if you know how awesome cupcakes from Portland fave St. Cupcake are, but they were a big deal for me in college after finals. Like, a really big deal. Go and have some. January 22, 7 p.m. to 10 p.m. / EcoTrust,  721 NW 9th Ave.

San Francisco: Celebrate 1973! The first 100 attendees will receive two free drink tickets. 70s attire is strongly encouraged, and it’s a dance party. I want to go to. January 21, 8 p.m. / Element Lounge, 1028 Geary St. RSVP on Facebook and be sure to invite friends.

Pro-Choice Parade & Day of Action for Reproductive Justice. March with like-minded feminists in celebration of our right to choose. January 22, 11 a.m. to 2:30 p.m. / Harry Bridges Plaza, Market & Embarcadero Sts. RSVP on Facebook and invite your friends.

And yes, there are even a couple of feminist events this week that have nothing to do with Roe v. Wade:

Everywhere: Premiere of the New IFC Comedy Series PORTLANDIA. Portland is where my heart is, but even if you know nothing about the city this show is probably going to be really rad, as it’s written by and starring Fred Armisen (SNL) and Carrie Brownstein (1/3 of the riot grrrl band Sleater-Kinney, my favorite band of all time). I know where I’m going to be January 21 at 10:30 p.m. ET/PT.

Healthy Weight Week. The 18th annual Healthy Weight Week is a time to celebrate healthy diet-free living. Let’s all be accepting and loving of our bodies, and happy and healthy at our natural weight. January 16-22.

Even if you can’t make it to any of these events, you can still make a difference and celebrate in the comfort of your home by urging Congress to improve women’s access to emergency contraception or support other online actions promoting a woman’s right to choose.

So much celebrating to do! If you know of any other feminist events this week, post them in the comments. If you have an upcoming event to feature, email me at [email protected]

Photo from Wikimedia under Creative Commons 3.0

Abortion Restrictions Harm LGBTQ People Now
Martha Kempner on Sexuality in the U.S.: ‘This Is a Really Scary Moment for Sexuality and Sexual Agency’
It’s Not Just the Supreme Court—It’s the Fossil Fuel Industry, Too