Jane Velez-Mitchell: "More" Won't Make You Happy (Unless You're a Corporation) - Ms. Magazine
Skip to content 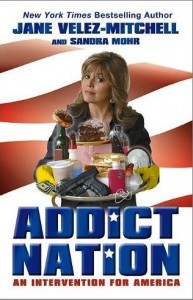 Jane Velez-Mitchell isn’t just host of “Issues with Jane Velez-Mitchell” nightly on CNN’s Headline News, but an author, environmentalist, feminist and one of the rare gay journalists (well, openly so) on TV. She recently published Addict Nation about how the American economy is based on making us addicts of consumption in order to keep corporate profits up. The Ms. Blog had a chance to interview Jane, and here’s what she said.

Ms. Blog: Why did you write a book about addiction?

Jane Velez-Mitchell: I’m a recovering alcoholic and, knock on wood, I’ll have 16 years [recovery] in April. After I got a few years under my belt, I started looking around at people exhibiting a lot of addictive behavior, with shopping too much, eating too much, popping too many prescription pills, staying on the Internet too long, cleaning their house excessively and obsessively and all sorts of other extreme behaviors.

It occurred to me that we live in this addicto-genic culture where everything is about ‘more is better.’ So I decided to hold a Consumers Anonymous in my house, just like a regular 12-step meeting. It was extraordinary how it became emotional very quickly, and people started sharing their guilt and shame about their overconsumption.

Why are so many people engaging in such addictive behavior?

I think our culture conditions us to behave addictively. We’re all bombarded with thousands of ads every single day that tell us that we’re incomplete, and we would only be complete if we bought this item or we ate this thing. They do all this research to connect these ads with very primal desires: sex, popularity, acceptance, sexual attractiveness, patriotism…desires to be part of the group and to be attractive and to be loved.

So we are looking to fill the void on the inside with something from the outside, and it’s just a lie. That’s not the way happiness is achieved. There is not one material thing that you can buy that’s going to make you happy. It may give you a hit of pleasure, short term, but the old feelings of unhappiness are going to come up again.

So who encourages these addictions and who benefits from them?

Well that’s what people have to wake up and realize–that they are enslaved, and that a very tiny fraction of America is getting super wealthy off of these addictions. In the last couple of decades the average American’s income has remained flat, but the very tiny percentage at the top have seen their incomes skyrocket by something like 1000 percent.

This whole nonsense about we’ve got to go out and spend to get the economy going … it’s going to the very wealthy. We’re not benefiting ourselves at all. It’s a double whammy on the consumer–we’re allowing ourselves to become addicted to all this destructive stuff, it’s putting us in debt, it’s making us fat, it’s getting us hooked on prescription pills.

You say in your book that our society is based on corporate socialism. Can you explain that?

So are you saying that the corporations are encouraging our addictions so that they can make money off them?

How do we regain control of our government from big business?

Have a consumer revolution. Women make most of the purchasing decisions in the household. The first thing I say to women out there is that every decision you make throughout the course of the day is not a personal lifestyle choice. It is first and foremost a political choice, it’s an environmental choice and it’s a moral choice.

I would ultimately like to see a consumer movement where women take the power back by saying, ‘I’m not going to buy all these products that are enslaving me and making me broke and making someone else rich.” So I say, don’t buy.