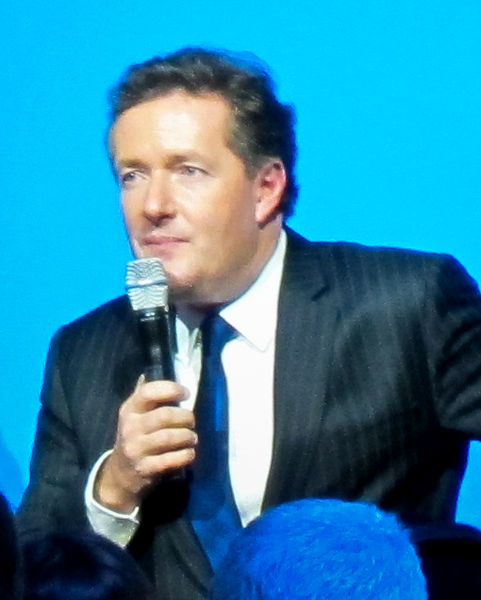 CNN recently replaced long-time host Larry King with British TV presenter Piers Morgan, and Piers is a real gift to the ladies. He’s a hard-hitting, thought-provoking “journalist” who gets right to the heart of things–like the time he asked former Secretary of State Condoleezza Rice if she’s “high maintenance” or “romantic,” and if she “dreams of a fairytale wedding”–you know, the real groundbreaking, big-ticket questions.

Well, last night Mr. Morgan snared my little lady heart. In an interview with his BFF and former “boss,” Donald Trump (Morgan was the winner of Celebrity Apprentice in 2008), Morgan brazenly announced that Trump’s greatest achievement was not his celebrity, success in business or massive fortune, rather, it was the “huge array of dazzlingly beautiful women” he has managed to “snare” over the years. Ahh, a fella after my own heart.

Trump, surprisingly, chose not to engage, saying he has “tremendous respect for women” (and not just beautiful women, all women! Except for Rosie O’Donnell, who he famously called a “big, fat pig.”), and that he was among the first to hire women builders and women in real estate. But then a few minutes later he reminded us that he owns the Miss America and Miss Universe franchises, and said the pageants are actually “really good for the girls.” Oops, sorry Donald. One step forward, five steps back.

But let’s get back to Piers Morgan. Not only does he lack journalistic credibility–his TV presenting resume includes both Britain’s Got Talent and America’s Got Talent and a three-part television documentary entitled The Importance of Being Famous–but he was brought to CNN to boost ratings as the network fell steadily behind competitors MSNBC and Fox News. Since Morgan’s interview style is known for being obnoxious and invasive, it was a perfect solution to low ratings, direct from the Glenn Beck school of television: When things get tough, why not spice ’em up with a little sexism!

Now Piers, as a fellow Commonwealth ex-pat, I understand you might be having a tough time adapting your wry Brit wit to the brash humor of the U.S. But you’re really doing a piss-poor job of it. Sexism isn’t funny or inventive; no one is responding, your guests aren’t laughing and your ratings are pitiful.

And I know you think you have that sort-of-oblivious (but secretly genius) David Frost thing going for you, but you don’t. You’re a terrible replacement for Larry King, who, though he wasn’t my favorite anchor, could at least point to sexist discrimination as the reason for Katie Couric’s low ratings. You’d probably just point to her high-cut blouses.