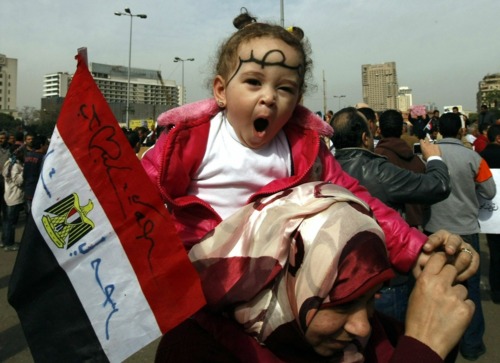 Joyful screams–“Allahu Akbar!” “God is great!”–tears and hugs erupted in the streets and in homes across Egypt this morning as the 30-year reign of former president Hosni Mubarak at last came to an end.

Democracy Now! senior producer Sharif Abdel Kouddous is on the ground in Egypt. He tweeted, “Every street is filled with people cheering, celebrating, honking, dancing. Indescribable.”

Hours before Mubarak’s resignation was announced, The Root‘s Rebecca Walker interviewed renowned Egyptian feminist Nawal El Saadawi in her home in Cairo. As she rushed out to join the revolutionary masses, Saadawi said,

This revolution changed everything. In history, the millions win, that is democracy. Now the people in the street say no to Mubarak and then will form a temporary government, protected by the army. Then we have to protect the revolution from being aborted; that is the most important fight.

Women have played a visible and pivotal role in this revolution; they’ve been on the front lines of uprising in Egypt for the first time ever. For Rihab Assad, a Cairo resident, the sight of a woman holding a megaphone and leading protesters was stunning. “And all of these men just chanting after her, repeating what she said,” Assad told the Los Angeles Times. “To me, this was something entirely new.” For Egypt’s women, it is a new day–the power is in the hands of the Egyptian people, women and men alike.

It is Freedom Friday today in Egypt.

Photo of mother and child in Tahrir Square from Flickr user Generationbass.com under Creative Commons 2.0.