In their poor country with too few doctors for too many need families, thousands of young Ethiopian women act as counselors, midwives, health teachers and sources of inspiration.

Eight years ago, Aster Roba saw something no 14-year-old schoolgirl should ever have to witness: her mother wrestling with near fatal complications during childbirth.

Her mother somehow made it to a hospital from their home in a rural Ethiopian village 150 miles south of Addis Ababa and delivered by C-section a healthy baby—her 10th in 10 years. But the image of her suffering haunts Roba, and it changed the direction of her life. “After I almost lost my mother, a health extension worker came to our house because she knew what had happened,” she says through an interpreter, speaking with old-soul calm. Surrounded by a dusty collection of barefoot children in stained and tattered clothing, giggling and pulling at her skirt, she continues, “The health extension worker talked about family planning and having fewer children and spacing them out. I realized this is what I want to do. I never want someone else to suffer like my mother did.”

After a year of training, Roba is now a health extension worker (HEW) herself, one of an army of more than 30,000 women dispatched by the Ethiopian government in the past seven years under its Health Extension Program (HEP). HEP takes aim at a tangle of poverty-fueled health problems—led by malaria and respiratory illnesses like tuberculosis—that plague this lush, sprawling country of nearly 83 million, the third most populous in Africa. Four-fifths of its people live in a patchwork of villages and towns, often far from the larger cities and from health-care facilities, let alone basic amenities.

In Daka Werekelo where Roba lives and works, 2,000 people reside in a sprawling cluster of mud huts. As a health extension worker, Roba walks from home to home beating the drum about family planning, HIV prevention, hygiene,nutrition and other healthy practices.Twice a month she holds community meetings in a field, gathering together the people in her village to exchange information and voice health concerns. She also digs latrines and distributes mosquito nets, and in the small office she shares with a 20-year-old colleague, she inserts birth-control implants, administers contraceptive injections, provides prenatal and gynecological care, vaccinates children and treats diarrhea. Some days she helps women deliver babies in their homes; she has brought about a dozen children into the world.

Roba and her colleagues focus most on the country’s top health priorities: saving the lives of thousands of Ethiopian women who might die having babies and protecting infants who might never reach their first birthdays. According to a recent study in The Lancet, the current maternal mortality rate is 590 deaths for every 100,000 live births, compared to just 13.3 deaths per 100,000 in the U.S. Put in stark terms of real women’s lives, more than 25,000 women and girls die each year of childbirth complications in Ethiopia. And that figure is far surpassed by the 381,000 Ethiopian children a year who die before they reach age 5.

It’s not surprising that women’s and children’s health is such a problem: Ethiopia is ranked the second most impoverished nation in the world under the U.N.’s Multidimensional Poverty Index (MPI), with 90 percent of its people living in poverty and more than 60 percent illiterate. Only $16 per person is spent on health, less than half of the World Health Organization’s recommendation of $34, and the bulk comes directly from international aid. 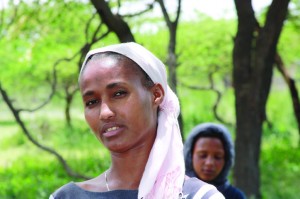