This Century’s War of the Roses - Ms. Magazine
Skip to content 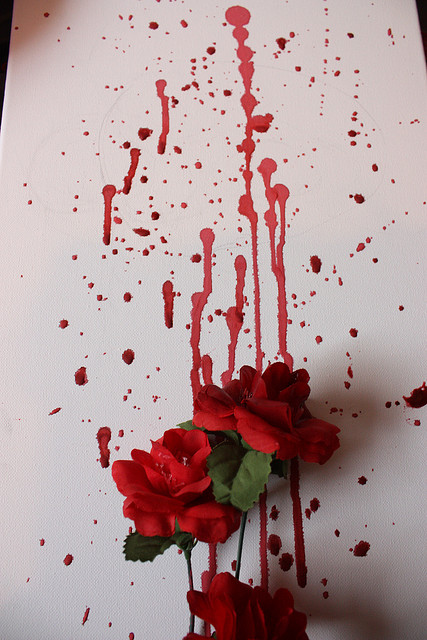 Regardless of your feelings on Valentine’s Day–whether you were the cis-girl who staged Valentine’s day protests, the trans-boy who nervously wondered if the girl he liked could get past their cissexism, or the teacher who smiled on it all–the gift of flowers is usually considered a harmless staple.

However, like many other products that reach the shelves, Valentine’s Day flowers have a much more sordid history than their appearance suggests. The USA imports the majority of its Valentine’s Day flowers from nations like Colombia and Ecuador with few worker protections. Factory workers arrive at their jobs just after pesticides have been sprayed, then go to work with little ventilation–incurring health problems such as headaches, rashes, lung and respiratory problems, and for women, increased chance of miscarriage and birth defects.

And 70 percent of the people working in the flower factories are women.

Like in many maquiladoras around the world, women are hired to these positions because it is assumed that they are “docile,” that it isn’t necessary to pay them as much because they must have husbands, and because they have “nimble fingers”–gender essentialism at its worst. Because for many women, these factory jobs are the only opportunities they have to gain some form of income, predatory managers see them as easy targets for sexual assault: if the women speak up, they could get fired.

High-demand holidays such as Valentine’s Day and Mother’s Day force workers to work for longer hours in their squalid factories, with no extra-time pay, and still earn as little as $2 a day. The pesticides from these factories drain out into bodies of water, killing much of the local wildlife and entering the local water sources. While there have been no conclusive studies on the subject, it’s not hard to imagine that this overabundance of pesticides plays a part into why women in developing countries are developing breast cancer 10 years earlier than women in developed countries.

While it is easy to simplify and suggest that globalization is simply something that “happens” to poor victimized women, it’s important to note that women have been at the forefront of fighting for change.

In my classes on International Development, whenever we discussed the abuses of big agriculture in non-Western nations, someone would always pose the question: Is it really better to boycott abusive companies when for their women workers, they are the only source of income? It’s an interesting question, but it assumes that global poverty is a zero-sum game: Either we accept that 80% of the world lives in extreme poverty and boycott any company that might employ them, or we begrudgingly buy products tainted with low wages, poisonous working facilities, and physical, psychological and sexual abuse thinking, “At least they’re earning some money.” Are those really the only two options?

The short answer is: absolutely not. While corporations may seem immovably big and their factories impossibly far away, there are still actions we can take to support our sisters abroad. After all, even Starbucks, one of the most pernicious symbols of western neoliberal imperialism, now guarantees fair trade coffee–all on account of activists worldwide.

1: Sign a petition. Because over 50,000 people signed a Change.org petition asking 1-800-Flowers to pay their workers fair wages, cease sexually exploiting them, and offer them safe working conditions, 1-800-Flowers has promised to launch a fair-trade certified line of flowers in time for Mother’s Day. Next up: Albertson’s, Pro-Flowers, and Pro-Plants, who also scored a “D-“ on ethical treatment of workers. Sign here to hold them accountable:

2: Look for an organic label (maybe). Ideally, the “organic” or “green” label would mean that the flowers were grown sans pesticides, saving flower workers from dangerous exposure. However, since it’s unregulated and “green” is the new “cool,” many items have reached shelves with an “organic” label that doesn’t mean pesticide-free. For flowers, one label to trust while looking is that of VeriFlora; the Scientific Certification Systems website has more information as well.

3: Buy your flowers locally. Though U.S. laws on pesticides are not perfect, they are stricter than in countries where we import flowers from. 20 percent of the pesticides used in Colombia are so dangerous that they have been banned in the U.S. and Europe.

4: Annoy the hell out of your local supermarkets. One of the best parts about activism is free license to “annoy” (a verb too often used to disparage women’s voices for change). If you annoy stores enough to carry fair-trade and organic flowers, eventually they’ll cave. And Albertson’s definitely needs the wake-up call.

5: Invest in women, not in abusive corporations. As I understand it, there were some serious allegations made against Muhammad Yunus–founder of the Grameen bank in Bangladesh and poster-child of the microfinance movement–however, he was recently cleared of all charges from the Norwegian government (and since Norway has a reputation for having the smallest gender gap in the world, I’m inclined to trust them). If you’re still uncomfortable with that, the Grameen bank doesn’t operate in Latin America, but microfinancers ACCION (action) and FINCA (farm)–both non-profit organizations–do.

For more information, check out Oxfam International’s Campaign to help Colombian flower workers. For more on how women have been pushing back against exploitation, check out AWID.