We Heart Esperanza Spalding-But Not How the Grammys Presented Her - Ms. Magazine
Skip to content 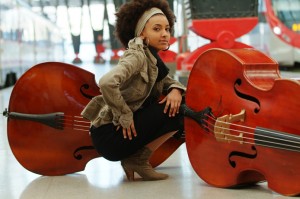 Perhaps the biggest surprise at the unsurprisingly bombastic Grammy Awards last night was the Best New Artist. No, the winner wasn’t tween heartthrob Justin Bieber (whose loss caused an online riot), lover-man rapper Drake, indie darlings Florence and the Machine or even the marvelous Mumford and Sons: It was a 26-year-old standup jazz bass player (!) from Portland, Ore., named Esperanza Spalding. If you had never heard of her before, you’re not alone.

Spalding’s actually not a complete newcomer: She’s been on the music scene since 2005, has played for Obama and put out three well-received albums. But she’s a jazz musician (player, singer, composer, arranger), not a pop-friendly Gaga or Aguilera or even an Alicia Keys, though she shares with the latter a combination of singing and playing chops, plus, let’s be honest, a fabulous look. In a recent interview with ABC News, she even admitted to a fleeting desire to emulate Keys commercially when she was asked to appear last year on the BET awards in a tribute to Prince:

I was really on this mission, kind of in my mind, to figure out how I was going to take my music and make it accessible to the pop world. ‘How am I going to turn this into like an Alicia Keys thing?’ …

[But at rehearsals] every person looked like a California raisin—this incredibly delicious, tasty, captivating artist, who has a magnificent magnetism and a unique flavor about what they do and who they are, but all of that has just been sucked out in every direction. … The industry has surrounded them with all of these superficial pyrotechnics and I think it’s really sucked the life out of their creative spirit …

I decided that I was just happy to be a visitor from the liberated realm of jazz … I want to be the one deciding what my art means, how it’s presented, even if that means not becoming a pop superstar.

Unfortunately, despite the award she received, the Grammys did not present her as a musician the way she deserved. She played and sang in the background as Neil Portnow, president of the National Academy of Recording Arts and Sciences (NARAS), and Glee‘s Matthew Morrison went on and on about the great things that the Grammy organization does. I wanted to shout at the screen, “Shut up, get off the stage, and let Esperanza play!!” It was an obvious attempt to keep any jazz-resistant viewers from switching stations, but turning jazz into cocktail music insulted the artists that NARAS purports to honor.

It’s an extra bonus that Spalding won her Grammy during Black History Month, as she’s now a part of that history as well. She told BlackAmericaWeb.com:

I find the concept of Black History Month intriguing. Black history is world history, from any angle you want to explore it. It’s impossible to separate the history and the storyline of Black people from anything that we can see in our daily lives. Maybe people like to think they’re not connected, but it’s impossible. Everything in our culture stems from Black history and stems from white history, and that’s just the world we live in.

We look forward to many more years of history-making from this talented and duly-honored young woman.