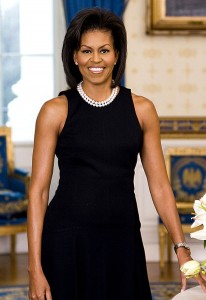 Whether she gets it right or wrong, and who can please every eye, Michelle Obama’s taste gets noticed, written and talked about, tweeted, blogged, photographed and copied. Her style sets trends. Belts are big again–because of her penchant for a neat waist, we have her in part to thank for the cinched-in look now in vogue. Trading in the tailored jacket for a softer buttoned sweater, most often in pastel, she has helped popularize the cardigan, a staple from the ’50s updated.

Color doesn’t frighten her. Neither does the bold, off-beat accessory. Her aesthetic is eclectic, blending what affirms her sense of self. The combination mixes preppy with risk-taking individuality, breaking and remaking rules. She pulls from here and there as she clothes her defined, disciplined body with elegance, showing onlookers an African American woman with power and prestige who knows and likes who she is and the choices she has made for herself, her family, her community. Now that is a heady combination–but it does not come without precedent.

In the antebellum years, African-descended women often became seamstresses, making clothes for the master and his family and for their own extended families. In the personal clothes they made, many of these women reshaped the lackluster fabric of sameness, creating color with thread, berries or paint, re-working hand-me-downs after hours. In their handwork, they expressed personality and values, giving form and pattern to the merger of traditions. Possessing little more than their bodies, they produced styles linking yesterday and today, so the lessons of another, alternative time continued to live.

Several of these seamstresses from the era of slavery impacted history.

The imprimatur and appeal of Black-inflected style at the White House is not a new reality; its legacy draws from the Lincoln and Kennedy years. For example, African American couturier Anne Cole Lowe has received relatively little credit for the stunning gown she fashioned for another iconic First Lady of style to whom Michelle Obama is often compared, Jacqueline Kennedy, when she married president-to-be John F. Kennedy in 1953.

Michelle Obama, who embraces her Southern ancestry, stands tall, proud and Amazonian in the new era that she is imprinting with her well-rooted aesthetic of difference.

Barbara Lewis, director of the Trotter Institute for the Study of Black History and Culture, is an associate professor at UMass Boston where she currently teaches the course “Whole Cloth and Pieces: The Fabric of Slavery.”