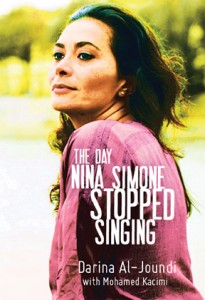 Stories of female teenage rebellion set in narrow-minded suburbia can be gut-wrenching enough, but when the revolt takes place in the midst of raging war and a clash of fundamentalists it’s a whole different story.

French-based actor/writer Darina Al-Joundi was born in 1968 to a Shiite Lebanese mother and a secular Syrian father and was only 7 years old when the Lebanese civil war, which lasted 15 years, broke out. Her memoir, The Day Nina Simone Stopped Singing, which comes out March 1 from the Feminist Press, is her account of growing up atheist and rebellious in a country torn apart by religious fundamentalists. It’s also an inspiring record of her never-ending passion for living life as a liberated woman, no matter the consequences.

Al-Joundi’s journalist father encouraged his three daughters to defy taboos of sex, religion and womanhood under the motto “it’s forbidden to forbid;” the book’s title comes from a story about her father’s request that Nina Simone‘s “Sinnerman” be sung at his funeral. Their home was filled with artists and political rebels holding progressive debates, and was a place where fasting and praying were not allowed. Al-Joundi’s father taught her the pleasures of hedonism early on, and frequently took her out drinking and dancing. Her teens were filled with decadence and disobedience, having numerous sexual encounters and wild explorations of drugs.

Several scenes stay with you long after reading them. Al-Joundi’s brief affair with a young Shiite vigilante is one; she writes,

We didn’t talk about the war, I no longer asked myself any questions like the rest of the world. They kept waging war without even knowing why; they kept waging war just to wage war. We had no ideals, no goals, not even enemies anymore.

But then a few sentences down, the lust and the force of adolescence is there again, no matter how dark.

I liked making love on the demarcation line, in wrecked buildings with their black facade pierced with thousands of bullet holes. I’d lean my hands against the wall and while Daoud was coming inside me I’d read the innumerable graffiti covering the walls of these ruins: To Marika, the whore, forever. To Alya, to death and love. In the distance I’d see the ghostly sea and city and I’d yell to Daoud, ‘Come, come, come before we die’.

The book is full of these brutal and bizarre scenes, and it’s astonishing how many of them can be mistaken for fictional scenes from a movie. The reality of war is so absurd that it doesn’t seem real. But it is, of course, very real, and keeps being so today. In the light of the unrest in the Middle East and recent uprisings in Egypt, Libya, Tunisia and Bahrain, The Day Nina Simone Stopped Singing provides a relevant and important portrayal of life during wartime from a rarely seen perspective–that of the non-victimized woman. For despite all the oppression Al-Joundi is subject to, she never takes on the role as incapacitated victim: She always keeps fighting the rules and defying the taboos.

Image courtesy of the Feminist Press.