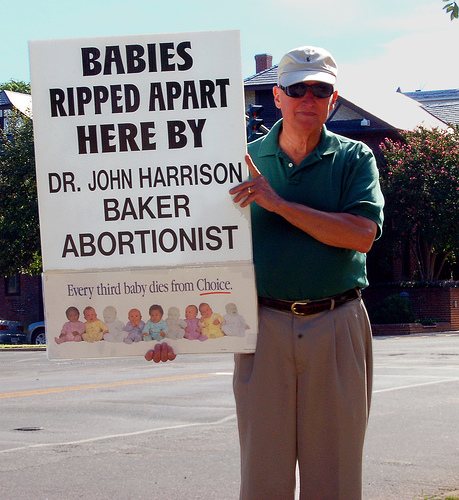 “Are doctors who are willing to provide [abortions] still just on their own, with their face on WANTED posters … waiting to see what happens next?… How do we as a country react?”

Rachel Maddow posed that question last week as she reported from Kansas on the escalating campaign of threats, harassment and terror against Dr. Mila Means, who recently announced her plans to provide abortions in Wichita.

Abortions have not been available in the city since the murder of Dr. George Tiller in May 2009. Means has now become the target of an aggressive campaign led by anti-abortion extremists. WANTED-style posters featuring Means’ photograph and address are being circulated in Wichita and online, and about a dozen anti-abortion zealots stalked the physician at her rural Wichita home.

Threats of violence against abortion providers intended to prevent them from providing reproductive health-care services—like those against Means—are prohibited by the FACE act, by state anti-stalking laws and by criminal threat and trespass laws. Although these threats can and should be prosecuted, all too often they are not. And time and again, threats that are ignored by law enforcement escalate to violence.

But no legal actions have yet been taken against the protestors. (A previous Kansas attorney general, Phill Kline, currently facing ethics charges, not only failed to prosecute those who threatened and stalked Tiller but used his public office to launch an inquisition against the doctor.) On the other hand, the disruptive protests outside Means’ family practice office precipitated a lawsuit against her from her landlord, and now she is not allowed to perform abortions at that office.

The anti-Means protestors include some of the same anti-abortion extremists who used to protest against and stalk Dr. Tiller. As Amanda Robb pointed out in her investigation of Tiller’s murder for Ms. last year, those who have murdered abortion providers–such as Tiller’s assasin, Scott Roeder–operate within a network of extremist advocates rather than being “lone wolves.” They are emboldened by an atmosphere in which acts of intolerable harassment, vandalism and threats are not adequately dealt with by law enforcement authorities.

Wichita is not the only city in which abortion providers are currently under threat. In North Carolina, doctors are being stalked at their homes and offices, targeted with Old-West style WANTED posters. Dr. LeRoy Carhart, who used to work with Tiller, is being harassed at his clinics in Maryland and Nebraska. In all, doctors and clinics in 14 states are under siege by inter-related networks of anti-abortion extremists.

The Feminist Majority Foundation has launched a petition drive urging Kansas attorney general Derek Schmidt and Sedgwick County District Attorney Nola Foulston to use every tool available to stop anti-abortion extremists from escalating their campaign of terror in Wichita–before another doctor is murdered. You can sign it here.

We cannot let anti-abortion extremists win in the streets with their campaign of violence, terror and harassment. There must be zero tolerance of violence and harassment aimed at vilifying doctors and denying women access to vital healthcare.

Above: Anti-choice protester in Richmond, VA. Extremist campaigns of threats, stalking and harassment of abortion providers are a nationwide phenomenon. Photo courtesy of Flickr user taberandrew under CC 2.0.