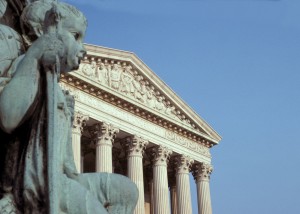 March 2, 1970: In what is hoped will be a major advance for women’s rights, the U.S. Supreme Court agreed for the first time today to hear a case alleging sex discrimination in violation of Title VII of the Civil Rights Act of 1964.

The plaintiff is Ida Phillips, who was denied a position as an assembly-line trainee in 1966 because the Martin Marietta Corporation has a rule against hiring women–but not men–with pre-school-age children.

The ruling gave an apparent “seal of approval” to Martin Marietta’s assumption that mothers had greater family responsibilities than fathers, which might make them less reliable employees. As the judges put it, they did not believe Congress intended to:

exclude absolutely any consideration of the differences between the normal relationships of working fathers and working mothers to their pre-school-age children, and require that an employer treat the two exactly alike in the administration of general hiring policies.

When the entire Fifth Circuit Court was asked to hear the case, it refused to do so. One of the judges who voted not to hear the case was G. Harrold Carswell–now a nominee by President Richard Nixon to fill the Supreme Court vacancy left by the resignation of Justice Abe Fortas. As a result of Carswell’s opposition to hearing the Phillips case in October, NOW president Betty Friedan and Rep. Patsy Mink (D-HI) appeared at his confirmation hearings on January 29 to oppose his nomination because he could not see that discrimination against mothers was discrimination against women. This was the first time a Supreme Court nominee had ever been opposed because of bias against women.

Believing that the Fifth Circuit panel’s line of “sex-plus” reasoning could excuse a wide variety of discriminations against women, the Justice Department filed a “friend of the court” brief asking the Supreme Court to review the case, which it agreed to do today.

Section 703 (a) of the Civil Rights Act of 1964 requires that persons of like qualifications be given employment opportunities irrespective of their sex. The Court of Appeals therefore erred in reading this section as permitting one hiring policy for women and another for men–each having pre-school-age children.

When sending the case back for retrial, however, the Court did suggest that if Martin Marietta could prove that women with small children had greater family obligations than men, and that this would reflect on their job performances, such bias could be justified as a “Bona Fide Occupational Qualification reasonably necessary to the normal operation of that particular business.”

Justice Thurgood Marshall disagreed with this part of the opinion, and said that the “B.F.O.Q.” exception was not intended to “permit ancient canards about the proper role of women to be a basis for discrimination.” He believed it was meant to be applied very narrowly, and only to jobs that require specific characteristics possessed by only one sex, such as those of actors and fashion models.

Legal action apparently ended with this ruling, as there is no further record of a rehearing or verdict by the lower court. G. Harrold Carswell’s nomination to the Supreme Court was rejected by the Senate on April 8, 1970 by a vote of  51 – 45–though evidence of racism as well as sexism contributed to his defeat. Nixon’s next, and third, nominee for the seat was Harry Blackmun, confirmed by a vote of 94-0. Blackmun would serve from 1970 to 1994, writing the majority opinion in Roe vs. Wade in 1973.

Photo of the U.S. Supreme Court building from blm.gov under Creative Commons.