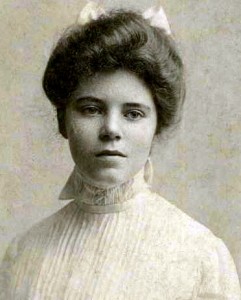 March 8, 1913: Alice Paul, organizer of the massive suffrage parade and pageant five days ago in Washington, D.C., and D.C. Chief of Police Major Richard Sylvester, who failed to protect the marchers, gave sharply contradictory views to a Senate subcommittee today.

Sylvester testified first, and was unwilling to accept any responsibility whatsoever, claiming that he did everything he should have, and that it was a failure to carry out his instructions that caused the mob assault on the parade:

I did my duty. I exhausted every effort I could command as an official, the head of the Police Department, to furnish the parade with the protection which should have been accorded. My conscience is clear.

He read aloud a series of instructions he supposedly issued to the D.C. police prior to the parade, and reports he asked his captains to write for the committee. Each captain insisted that he and his men had done their duty, and nowhere was there the slightest indication of the trouble vividly described to the committee on the day before yesterday. Spectators made no secret of their skepticism, though, and ridiculed the reports. In one of the few things that the suffragists in the audience heard from him that they could like, he said:

The failure of the police to protect was contrary to discipline, contrary to law, contrary to justice, contrary to my express orders, and the man who failed to do his part toward protecting these women should be immediately dismissed.

He provided no examples of discipline toward any officers, however.

Alice Paul, in contrast, furnished testimony that Sylvester should have known that his force wasn’t prepared, and that he had been repeatedly “bombarded” for over a month with requests for proper protection. Sylvester had been negative from the time Alice Paul had first asked for a parade permit, saying then that he had too few men to provide security for such an event because of the huge crowds that would be in D.C. for the next day’s Presidential inaugural. After the permit was issued, she reminded him of these remarks, and asked him to contact the War Department to provide additional help from the Army. Sylvester failed to do so, and even on the day of the march the Secretary of War was told by the authorities that no trouble was expected.

Fortunately, Secretary Henry L. Stimson ordered a troop of cavalry from Fort Myer to be placed just past the far end of the parade route as a precaution. When finally called into action, they were able to clear the street for the last few blocks.

The day concluded with more testimony about the indignities and assaults on the marchers. One of the contingents in the parade, composed entirely of men, was led by retired Major Gen. Anson Mills. He described crowds of “hoodlums” making insulting remarks and expressing their intent to break up the ranks of the marchers. The police did nothing to stop what he described as their “vicious” verbal and physical attacks.

The General’s wife, also in the parade, told of similar incidents, and said that if she’d had a police billy club, she would have forced the crowd back. It was that kind of fortitude, on the part of all the marchers, that enabled the parade to successfully finish despite no help from Major Sylvester and his officers.