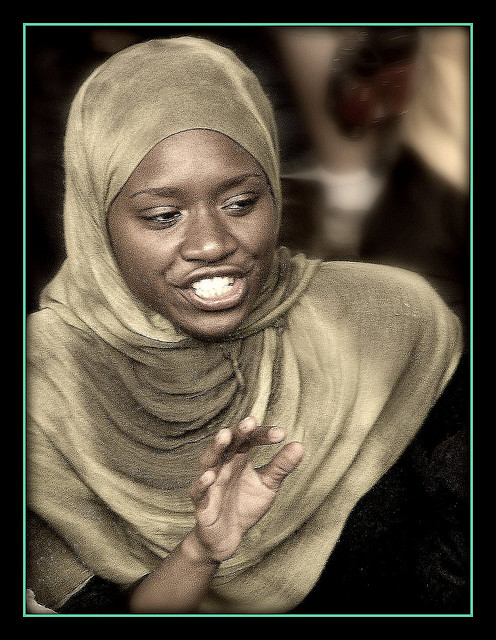 When corruption meets patriarchy, it usually means disaster for women in developing countries. That’s the story of the spread of the veil over the villages of northern Nigeria.

Since the return to civilian rule in Nigeria in 1999, Muslim sharia law has rapidly gained a foothold in parts of the country. Nigeria is roughly half Muslim and half Christian, with the Muslims being concentrated in the north and the Christians in the south. Since 1999, the 12 northernmost Muslim states have jumped to adopt sharia–to the ire of the secularist state governments of the south, who fear the harsh northern laws will spread to southern Nigeria.

In the bloody fallout of this increasing Talibanization of Nigerian politics, women are the most adversely affected. Many of the laws enshrined in Nigerian sharia lower the status of women and are a means of social control within the private sphere. Women, who have always been at a sociopolitical disadvantage, have been thrust even further into powerlessness–and shrouding this denial of rights is the proliferation of the veil, known also as the hijab.

The hijab is traditionally a cultural expression of Middle Eastern women, so despite the northern half of Nigeria being predominantly Muslim it was foreign to the African nation. But starting in the early 1990s, a silent revolution took place in northern Nigeria. If one were to go there today, they would not miss the growing number of women wearing hijabs or even burqas. Veiling, a practice rarely seen in northern Nigeria, is now nearly universal. Some of the Muslim states have even made the hijab a compulsory part of girls’ school uniforms.

Under the guise of religion, the veil has become a tool of  invisibility and spatial control. The veil is one spillover result of sharia that affects Christian women as well,  since their clothing is expected to be more restrictive to match that of their northern Nigerian counterparts. Bystanders in northern Nigerian villages will not stop to inquire about a woman’s religion before performing acts of vigilante violence against women who do not wear the hijab. Men are given the opportunity to judge morality in women, both Christian and Muslim, within a federal government that is supposed to be secular.

In addition to restricting the clothes women don, Islamic conservatism has also been aided by the growing popularity of kulle, the practice of secluding wives within the home. Before independence, the least strict form of kulle–which allowed women to leave their houses when escorted by males–was predominant. However, with the tightening of sharia, the strictest version of kulle–which doesn’t allow women to leave the house at all–became increasingly observed in northern cities.

Absolute wife seclusion on such a large scale is rarely seen in Muslim societies; it is a characteristic unique to northern Nigeria. The practice of kulle physically traps women in the home and precludes any chance of education or financial independence. 30 million Nigerian women are illiterate, making them the hapless victims of superstition.

Despite the severe curtailment of women’s rights in northern Nigeria, the emergence of grassroots activism lends hope to the idea of a women-organized backlash. Though these movements are still in their infancy, they appear to be gaining momentum in Nigeria and  in the international community. When the full-scale liberation does occur, it will be led by Dr. Ayesha Imam, a Hausa feminist and Islamist scholar. Imam has been outspoken against sharia since its implementation and founded BAOBAB for Women’s Human Rights, a women’s rights organization in Nigeria.

Though the hijab has been worn for centuries in other parts of the Muslim world, it is important to remember that it has a very short history in Nigeria. Its sudden spread has little to do with religion and purity, but rather shrouds the masculinist societal aims of a patriarchal society.  Aided by their own relative invisibility, women have started empowering themselves, but still have their rights violated and their enormous potential as agents of development ignored. The hijab is the new way of making women invisible under the thin guise of religious identity, and the stakes will only become higher as the veil spreads towards the Christian south, where a resounding clash of gender, religion and ethnicity is waiting to occur.