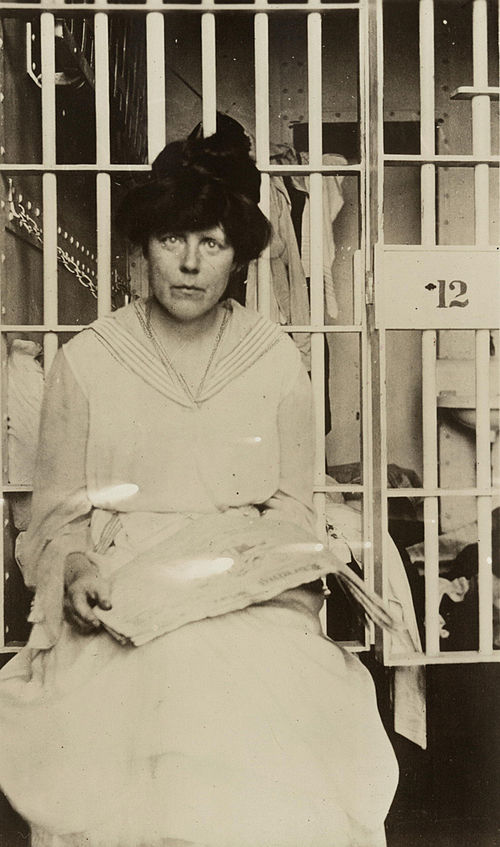 In honor of Women’s History Month, I’m writing every day about 20th century feminists (primarily the suffragists) from a you-are-there viewpoint.

March 10, 1919: Tonight’s gala at New York’s Carnegie Hall is a worthy finale to the nationwide, spectacularly successful 23-day tour of the “Prison Special.” An elaborate pageant of color and light opens the ceremonies, attended by 3,500 people eager to greet the formerly imprisoned suffragists. In the pageant, “Justice,” played by Vida Milholland, receives the women of the nations in which equal suffrage has already been achieved. Justice is then approached by a woman in chains and a group of black-draped mourners, representing America, who plead for a place in the light of true democracy. The pageant concludes with Justice holding aloft her torch and singing “The Women’s Marseillaise.”

Speeches from several of the ex-prisoners follow, each heartily applauded by an audience which includes former Governor Charles S. Whitman and a number of other prominent New Yorkers. “The militants are here, and we haven’t broken anything, not even broken down” said Louisine Havemeyer as she outlines the successes of the trip. There is even more applause when she announces that the National Woman’s Party, sponsor of the tour, now has enough pledges of support from members of the new Congress to pass the Susan B. Anthony (woman suffrage) Amendment and send it to the states for ratification.

Mary Winsor, who served time in the Occoquan Workhouse, tells of her experiences with brutality there, then notes:

Thanks to an eloquent speech by Mabel Vernon, the program successfully raises a good deal of money for what appear to be the final battles in the suffrage struggle. An unexpected but welcome event occurred near the end: A sailor asked to take the stage, and on behalf of the Soldiers’ Sailors’ and Marines’ Association and 24 other men in uniform who accompanied him, he denounced the brutal treatment given by fellow service members to the suffragists peacefully protesting outside a speech by President Woodrow Wilson six days earlier.

Tonight’s meeting capped a final busy day of activity. In the morning the suffragists stopped in Hartford, Conn., where they were greeted by a large group of banner-bearing citizens and escorted to City Hall where Mayor Richard Kinsella welcomed them. Katharine Hepburn–suffragist, birth-control advocate and head of the Connecticut branch of the National Woman’s Party–opened a rally in their  honor on the City Hall steps. She praised the courage of the women, then questioned the double standard used by many in condemning the “militance” of woman suffrage by comparing Woman’s Party actions–such as picketing the White House and burning the President’s speeches–to the violent revolutions of men seeking a voice in government:

The reason you do not apply the same reasoning to the woman’s case is that you have become used to looking upon women as naturally servile and second rate. You are willing to have them beg politely for their freedom but not demand it. Well, there are some women in this country who are neither servile nor second rate and who have the spirit to protest against the present position of American women until it is changed. They are among the most worthwhile women in this country, the kind you men really like in spite of all your old-fashioned notions.

Since the arrests of suffrage protesters continue, 16 having served time in the Charles Street Jail following a Boston demonstration two weeks ago, the courage she spoke about is still needed. But it’s clearly still in abundance, as the battle for the vote seems finally about to move from Congress to gaining approval by state legislatures.