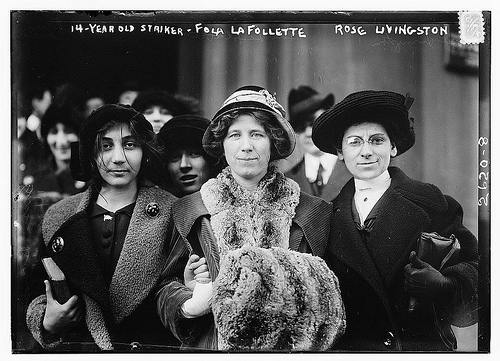 March 11, 1912: Though suffragists have many popular themes for speeches and meetings, tonight’s choice to address 25 objections to woman suffrage has outdone them all in terms of drawing a crowd.

Less than half of those who wanted to attend were able to pack themselves into New York’s City’s spacious Metropolitan Temple, but the crowd out on Seventh Avenue was assured that the remarks made at the meeting would be repeated at an overflow gathering. The attendance apparently surprised police, who initially had only one rather overwhelmed officer assigned to enforce the fire codes limiting the number of attendees.

It was Freeman who generated the most controversy by defending her fellow British militants:

Militancy hurts the cause, does it ? No, I don’t think it does. You have only to read the history of the United States to get the answer to this question. You read in the newspapers of the destruction of property in London. In Boston they destroyed the tea. in London we broke the windows.

She then reminded her listeners of the violence and brutality inflicted on the militants by the British government through the police, and explained that the reason the militants don’t simply work to replace the men who run the government is because their goal is to change the system itself.

To the charge that “women don’t understand politics,” Frederic Howe asked how they could, having never been given a chance to participate in it.

Most men can’t cook, either, for the very sufficient reason that they have never had a chance to learn how to do it.

Hutchins Hapgood addressed the charge that voting would make women less attractive by saying that just the opposite was the case, as women would become even more interesting, and “will gain richer and deeper charms.”

The myth that “woman’s place is in the home” was particularly offensive to Inez Milholland:

If her place is in the home, why is it that 9,000,000 women are now out of the home and at work in the mills, factories and workshops of the land?

She was just getting into full stride when the cowbell sounded, causing her to comment, “I haven’t begun to talk on this subject yet” as she went back to her seat.

Inez Haynes Gillmore was equally vehement regarding the argument that “the ballot means the bullet.” She noted that there was no direct relationship between military service and suffrage for individual men, then recalled fighting women like Joan of Arc and Molly Pitcher. She pledged that “If it is necessary for us to fight in order to vote, why, then, we will fight,” but added that “when women get the ballot, war will be as extinct as the dodo.”

Would enfranchised women take offices away from men? Only if they were more competent to hold them, according to Fola La Follette, and since “municipal government, after all, is only municipal housekeeping,” that might be a good thing on those occasions when it occurs.

Bertha Rembaugh, one of the final speakers, gave a whimsical reassurance to the men in the audience when she promised them that if women got the vote they would not try to make men “good” in too great a hurry. Now, armed with facts and logical responses to the most common arguments against suffrage, the overwhelmingly supportive and enthusiastic audience can go forth as well-trained “Votes for Women” advocates to lobby their own family members, friends and neighbors–who will eventually determine the fate of woman suffrage in New York, the state where the fight began.

Photo of Fola La Follette (center) with other women at a strike action, from Wikimedia Commons.