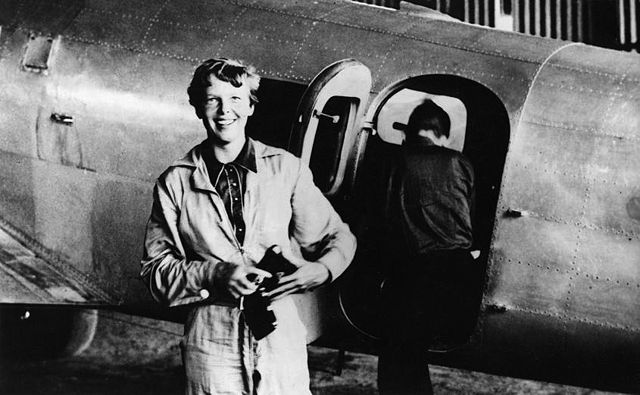 March 17, 1937: Amelia Earhart is airborne! More than 5,000 cheering fans were on hand as she took off from Oakland, Calif., for a record-breaking around-the-world flight.

Early reports are that all is going well on this first leg of the journey, with Hawaii as her goal. As grueling as this 2,392-mile flight may be, it is merely the first of three days of long-distance, over-the-water flying, with the next hop to tiny Howland Island and then on to Lae, New Guinea, 6,500 miles from Oakland.

She is attempting to become the first pilot to circle the globe at the Equator, its widest point. Her 27,000-mile route exceeds by more than 10,000 miles the one taken by the late Wiley Post four years ago. Though the flight is universally described in the press as a “great adventure,” Earhart insists that it is really a practical exercise to further the cause of aviation and test out new navigational instruments and radio devices that could expand passenger and cargo routes.

Either way, she’s in the air now in her “Flying Laboratory,” accompanied by navigator Fred Noonan, who has flown the Pacific many times for Pan American; Harry Manning, whose knowledge of the South Seas as a ship’s captain will be useful for the early part of the flight; and technical advisor Paul Mantz. Though she has done long flights over water previously, finding a small island is not the same as aiming for a continent, so she says she will be taking every precaution and using four means of navigation: Dead reckoning, which is estimating one’s position based on heading and speed; radio bearings from ships at sea and shore stations; a radio directional finder; and celestial navigation.

The present project is a logical progression of her history of flying. As she explains it:

Pilots are always dreaming dreams, I think. After being just a passenger on the Atlantic flight of 1928, I wanted to duplicate the crossing alone in my own plane. I pursued the dream of a solo flight for four years before it became a reality in 1932. One ocean naturally led to another and two years later, through hard work and planning and generous help, the opportunity came to try the Pacific. … One day last summer President Edward C. Elliott [of Purdue University, where Earhart was a faculty member] asked my husband what most interested me beyond immediate academic matters. Mr. Putnam [her husband], a practicing believer in wives doing what they do best, is an approving and helpful partner in all my projects. So he divulged my suppressed pilot’s yearning for a bigger and better airplane.

Once this most advanced plane, a Lockheed Electra 10-E, was financed and outfitted for her by Purdue, her ultimate-distance flight was inevitable. Good luck, Amelia! As an active member of the National Woman’s Party and strong supporter of the Equal Rights Amendment, your contributions to the struggle for equality for women are appreciated whether on the ground or in the air.

Photo of Amelia Earhart in front of her Electra in 1937, with Fred Noonan in the background, from Wikimedia Commons.