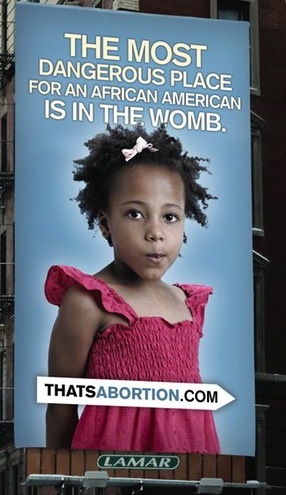 The American Independent reports that a branch of Dillard’s, a chain of 310 retail department stores in about 30 states, is hosting a fashion-show fundraiser for Heroic Media, the Texas-based media group behind the recent inflammatory campaign of race-baiting billboards.

The billboards, which read “The most dangerous place for an African American is in the womb,” have appeared in cities around the country, from Jacksonville, Fla. to New York. They have been roundly criticized by women-of-color reproductive-health coalition Sistersong as “offensive, racist, sexist and–most of all–disrespectful of our decision making.” NARAL has started a campaign to have all of the billboards removed.

Both Heroic Media and the Dillard’s branch insisted that the partnership is not political. Dillard’s Memorial City manager Stephen Brophy said the store accepted the request to sponsor a fashion show because another branch had done one at a previous store and it was successful.

“We try to not get too political,” Brophy said. “We’re about fashion. We try to appeal to the masses.”

Brophy said he didn’t know much about Heroic Media . . . he asked The American Independent if Heroic Media supports abortion rights.

The fashion show is likely to draw between 400 and 500 attendees, according to the store manager. The last fashion show hosted by Dillard’s “was attended by nearly 200 people and raised approximately $45,000 to go toward an Austin-focused campaign.”

African American women’s groups are standing up against the fundraiser. Toni Bond Leonard, co-founder and president of Black Women of Reproductive Justice, told The American Independent: “I don’t know how many Dillard’s customers are African American, but I think they should be outraged.”

Dillard’s, however, is not backing down from hosting the event. In response to a letter of complaint over the fundraiser, Dillard’s commented:

Dillard’s is not a sponsor of this event. The publicity incorrectly implied that Dillard’s is a sponsor. We are a fashion retailer providing merchandise for a fashion show which we frequently do for a variety of organizations in the communities that we serve. Dillard’s does not take any position with respect to social or political issues.

However, as blogger Samuel Smith argued, “money is speech”–when you support something financially, you are supporting its position. The show is scheduled for April 9. You can voice your objection by signing the below petition to ask that the CEO of Dillard’s and the store manager to cancel the fashion show.