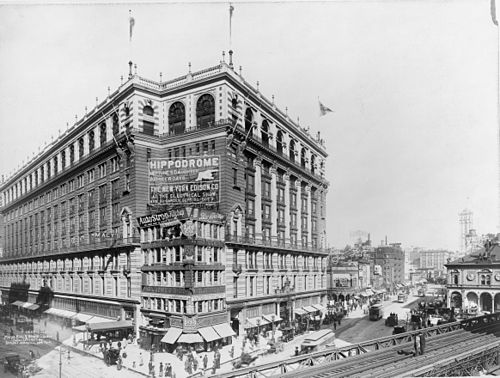 March 23, 1895: The plight of women and girls who work in New York City’s dry goods stores was the subject of compelling testimony at a legislative hearing today. Assembly members heard detailed accounts of oppressive working conditions, but also measures being implemented to improve them.

Alice Woodbridge was an early witness who testified, “It is nothing unusual for the girls to work from 10 to 16 hours a day.” When asked if she could name specific stores in which this was the practice, she said it was customary in all stores except three: Arnold, Constable & Company, B. Altman & Co. and Lord & Taylor.

The pay is as deplorable as the hours, according to Woodbridge: “The average wages of women in the dry goods stores of this city is $4.50 a week.” For “cash girls”–who carry change and parcels and act as floor messengers–the average wage is $1.50 a week. Some of the saleswomen at Macy’s–a store which compels employees to take unpaid vacations–get only $2 a week.

Dr. Jane Robbins testified that she has many patients who are “cash girls,” and they complain not only about wages and hours but about the way they are treated in the large retail stores. The older ones say the “small” ones are also subject to “corruption” by the male employees. The details of this practice, and where it occurs, were not described in public, but Dr. Robbins said this will be discussed privately with the head of the committee later.

The worst-paid and hardest-working young women Robbins sees are employed in flower factories, where they must run up and down stairs all day for $1 a week. She described one patient,

under 14 years of age, who is slowly murdered by overwork in a 14th Street dry goods store. But it takes a long time to kill a little girl who comes of good stock … I could show you a great many children in this city who ought to be playing tag, but who are in charge of counters in retail dry goods stores at $2 a week.

Robbins believes that prohibiting the employment of individuals under 14 would halt such exploitation.

Another witness was Josephine Shaw Lowell, president of the Consumers’ League. Her organization has compiled a list of firms who practice what they call the “standard of a fair house,” and whom their members will patronize. Lowell has made the rounds of stores at various times of the day to see if the law that mandates seats for women employees is being implemented. At some stores, there were no places to sit at all, and the managers stated frankly that they had no intention of complying with the law.

Another witness corroborated this attitude. When she complained to the manager that he provided no seats, she was told, “This is a business house and not a hospital,” though the manager finally agreed to put a couple of seats at the side counters. At other stores, Lowell found there were a few boxes behind the counters, but they were mainly used to stand on when women reached for high shelves. Even in the stores where there were a number of seats, virtually none were being used, even during times of the day when business was slack–so women were clearly discouraged or prohibited from using them.

Thanks to activist women like Woodbridge, Robbins and Lowell, and organizations like the Consumers’ League, it is hoped that working conditions will improve over time. The Consumers’ League traces its origin to 1888 when shirtmaker Leonora O’Reilly asked Josephine Shaw Lowell to work with the New York Working Women’s Society to improve conditions for the city’s women workers. Five years ago, the league was formally organized and circulated its first “White List” of companies with fair employment practices.

Photo of Macy’s in New York City, 1907, from Wikimedia Commons.