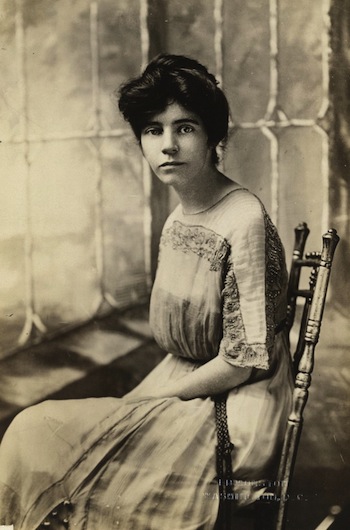 Today marks the end of Women’s History Month, and the completion of 31 days of David Dismore’s you-are-there reports (check through Mscellany to catch the ones you’ve missed). He ends with a post on his favorite topic, woman suffrage.

March 31, 1915: Today, Alice Paul‘s Congressional Union (CU) became a national organization, adopted a constitution and launched a suffrage campaign that puts it into a direct confrontation with a campaign by the more conservative National American Woman Suffrage Association (NAWSA).

The result of the all-day meeting of the CU’s advisory council makes it clear that there are large differences between national suffrage groups, both in style and substance. The Congressional Union, formed by Paul in 1913 as a local, Washington, D.C., group, was designed to support NAWSA’s Congressional Committee, which Paul led at the time. CU activists have always taken a more high-profile, aggressive approach to the suffrage battle than NAWSA officers felt advisable. It has engaged in activities ranging from colorful parades, motorcades and other spectacles to public confrontations with Democratic Party candidates over their party’s failure to endorse woman suffrage.

Though both NAWSA and the CU have nationwide woman suffrage as a goal, NAWSA still favors a state-by-state approach while the CU sees a federal amendment as the only practical solution. The primary goal of the new organization is to pass the federal Bristow-Mondell (Susan B. Anthony) Amendment, which if approved by 2/3 of both houses of Congress and ratified by 3/4 of the states would immediately enfranchise women. NAWSA currently endorses the Shafroth-Palmer Amendment, which would simply mandate a state referendum on woman suffrage if eight percent of registered voters in a state sign petitions requesting it.

As might be expected, relations between the two groups have not been cordial since Paul was ousted from leading NAWSA’s Congressional Committee in December of 1913 after refusing to resign from the CU. An attempt at reconciliation two months later failed, so the two groups have been rivals ever since.  NAWSA has referred to CU as an “unruly child” for its work against Democrats in five states during last year’s midterm elections, and today Lucy Burns advised fellow CU members who might still be in NAWSA to resign from that group and stop supporting it as long as it favors the Shafroth-Palmer Amendment.

The new group’s membership will be composed only of women, although men are welcome at the meetings–and the work of Marsden J. Perry, in attendance today, was praised. The main work of the day was planning how to expand the group’s presence into every state, though no CU meeting would be complete without a discussion about a massive public event as well. The one presently being planned is the Susan B. Anthony Pageant, scheduled for just before the opening of the next Congress, and it is hoped this will be the biggest such event ever staged.

FOLLOW-UP: The Congressional Union became a major force in the suffrage movement, evolving into the National Woman’s Party. In 1917 it initiated its most famous action by picketing the White House over President Woodrow Wilson’s failure to use his influence to help the Susan B. Anthony Amendment get the votes of reluctant Democrats. Picketers faced mass arrests, lengthy sentences, prison brutality, force-feeding during hunger strikes and much controversy over their tactics. But they did put the suffrage issue on the nation’s front pages. And President Wilson moved from a position of strict neutrality to one of vigorous support for suffrage, including an address to the Senate the night before a critical vote, calling for woman suffrage as a “War Measure.”

The National Woman’s Party also engaged in similarly militant confrontational tactics against individual members of Congress, inventing the “Card Index”–an exhaustive compilation of every imaginable fact about a particular politician, which proved quite useful to suffrage lobbyists. Passage of the 19th Amendment was an incredibly difficult task, and took a unique combination of the militant tactics of the CU/National Woman’s Party and NAWSA’s more traditional efforts to pull it off. The groups should share in the honors each August 26th when the victory of 1920 is celebrated as Women’s Equality Day.

Photo of Alice Paul in about 1915 from Wikimedia Commons