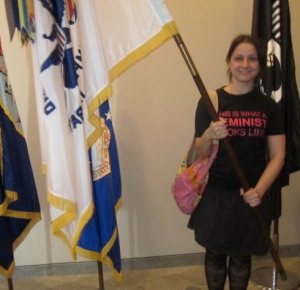 I grew up oblivious to gender inequality. As a child of the ’80s/’90s I never felt gender prevented me from doing what I wanted to do. I grew up playing sports, doing things that may have been traditionally “for boys,” and being told that any career option was open to me.  I eventually chose to enlist in the United States Coast Guard.

I was taught that as long as I continued to work hard that the sky is the limit and, in my case, why not strive to be the first female Commandant of the United States Coast Guard? I had my entire Coast Guard career planned out. I would join as an enlisted member, then make my way to Officer Candidate School and up the ranks to Commandant. I had a back-up plan as well: If all else failed I’d be the first female Master Chief Petty Officer of the Coast Guard, the highest enlisted rank in the Coast Guard. As long as I was determined and worked hard, anything was possible. Right?

The first day at my first unit out of basic training, the Office in Charge–a Chief–said, “I do not think women should be in the Coast Guard.” I thought to myself, As long as I work hard and give my all, I can prove him wrong and show that a woman can succeed. I stayed late, came in on my days off, studied religiously the material needed to become boat-crew qualified. I breathed and lived Coast Guard. I was determined to succeed and prove my Chief wrong.

Then I fell victim to rape. A brutal rape by a fellow Coastie. I reported it to the Chief, who ended up locking me up in the janitor closet and then made it out as being normal procedure for how a rape is handled. It was not. After the investigation, the Chief concluded that it was all a “misunderstanding” and forced the rapist and I to “work out our differences” by cleaning out the attic, an isolated area of the station. Together. I followed orders, but not without thinking to myself that something was not right. I had to continue working side-by-side and live on the same floor in military housing with my rapist.

Then I made it vocal. I told everyone that would listen. I WAS RAPED. I met with a Coast Guard Captain who said, “Sailors will be sailors.” He said “You are pretty, what did you expect was going to happen.” Others would tell me, “Women are morale gear” and “You reported a rape to ruin a man’s career.” A man’s career? How about MY career? I was told that rape is the reason why women “do not belong in the military.” Actually, women are not the reasons why there are rapes: The rapist is the reason why we have an epidemic rate of rapes in the Coast Guard, let alone the other branches of the U.S. military. I requested permission to attend A-school to advance in my career; I was told that I could not because of the rape.  The Chief wrote me up for “Feminist ideation.”

I wanted to serve without being raped. Having been raped, I wanted it to be taken seriously and to see my perpetrator be sent to the brig–not be handed an Honorable Discharge and told to go out in the community to re-offend. Instead, I was labeled as having ‘feminist ideation.” What is feminist ideation anyway?

I have since started the military rape crisis center, which has helped more than 6,000 service members who were victims of sex abuse while serving in the U.S. Coast Guard and the four other military branches.

Does it make me a feminist that I wanted to serve my country without being beaten or raped? Then, by all means, I am a feminist.

Photo of the author at the 2010 National Young Feminist Leadership Conference, visiting the Women In Military Service For America Memorial and holding a Coast Guard flag while wearing a “This is what a feminist looks like” T-shirt.