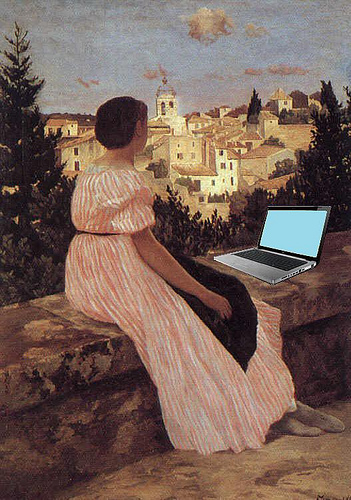 If you haven’t already heard of net neutrality, you must get up to speed. What ultimately happens with the fight for free speech on the Internet will have a direct impact on female representation in our media–and in our culture.

While women are 51 percent of the U.S. population, we own less than 6 percent of commercial TV and radio stations. It shows in the belittling way women are portrayed in advertising and the lack of female experts on news shows. But thanks to the equalizing force of the Internet, women have been able to shake off the strictures of mainstream media like a tight corset, and present media that more accurately reflects our perspectives and our place in society. Think of the innumerable blogs and sites where girls and women don’t have to ask male gatekeepers permission to share our opinions, comedy, art, music, stories, business ventures.

This is all thanks to the principle of net neutrality, which prevents Internet service providers such as Comcast, AT&T or Verizon from blocking, discriminating against or prioritizing online content that flows over the Internet and to your computer or smartphone. Prioritizing online content could relegate some Web sites to a “slow lane” on the Internet and others to a “fast lane.”

Without strong net neutrality protections, Web content created by and for women could be blocked or controlled by Internet service providers who want to push their own online services–and more importantly, their own representations of gender, sexuality and culture. Think that can’t happen? It already has. In 2007, Verizon blocked pro-choice text messages from NARAL Pro-Choice America.

The battle over preserving net neutrality has been raging for years. And the big companies appear to be winning. In December, the Federal Communications Commission (FCC) passed weak, loophole-filled rules, offering some limited net neutrality protections for wireline Internet, but far fewer for wireless Internet that you access through smartphones and other mobile devices.

Congress is now considering a move to overturn the rules and strip the FCC of its authority. A House committee has already voted to nullify the FCC’s rules, and the full House may vote on the resolution this week. Net neutrality is the free-speech issue of our time, and if we lose the Internet, we may never have another platform like it. Let your congressional representatives know what you think.

Excerpted from Women’s Enews. Read the full article at womensenews.org.

Megan Tady will be moderating a panel about women and media policy at the National Conference for Media Reform in Boston April 8-10.

Megan Tady is a blog editor and writer for the nonprofit media reform organization Free Press. She will be moderating a panel about women and media policy at the National Conference for Media Reform in Boston April 8-10.