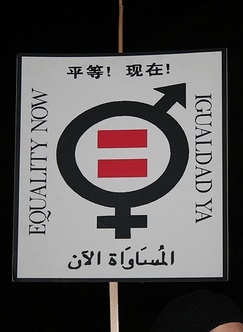 This year’s Equal Pay Day falls on April 12, marking how far into 2011 the average woman must work in order to earn what the average man had by the end of 2010. In the 15 years since Equal Pay Day was established, the gender wage gap has barely budged, moving from 74 percent in 1996 to 77 percent in 2010. This amounts to a three-cent increase in women’s wages for every dollar earned by men. Given that women make up half of the workforce, the gender wage gap does not generate the outrage that it should, as is clear from the failure of the Paycheck Fairness Act last November.

Polls confirm that most people believe women and men doing the same job should receive the same pay. But many are unaware of the extent of the problem, believe the wage gap is a result of women’s choices or think that the gap is a relic of the past. Thus, Equal Pay Day is the perfect time for some myth busting.

Myth #1: The wage gap is a result of women’s choices.

We’re less likely to think the wage gap is a problem if we believe it stems from women’s individual choices—to choose one job or field of study over another, to “opt out” of the workforce to raise children, or to fail to negotiate for higher pay. These arguments, prevalent in the media, overlook important research to the contrary. For one, men are perceived as more accomplished than women even when they have the same resumes. As for women “opting out” to become mothers, author Pamela Stone shows [PDF] that many professional women who leave their jobs to engage in full-time caregiving are not “opting out” but are “pushed out”: They are stigmatized and their attempts to stay on the career track are stymied. Correspondingly, Stanford sociologist Shelley Correll found that mothers are less likely to be hired and are offered lower salaries than fathers and women without children.

Furthermore, while it’s true that men are more likely to be working in higher-paid fields, women make less money than men even when they occupy the same jobs. Researchers at the Institute for Women’s Policy Research found that in the largest 108 occupations, men outearn women in all but four: (1) life, physical, and social science technicians, (2) bakers, (3) teacher assistants and (4) dining room and cafeteria attendants and bartender helpers. With respect to negotiation, researchers at Harvard and Carnegie Mellon have demonstrated that although women are less likely to negotiate, they are penalized more heavily than men when they negotiate.

Concerns about equal pay may have been mitigated by recent reports that in major cities, single, childless women in their 20s are out-earning their male counterparts. But several important details are often left out of the headlines. First, the pay gap between women and men is smallest when they are young and just entering the workforce, occupying lower-paid positions. As time passes, the wage gap increases as men move up the ladder more quickly and receive bigger raises. Second, young women are now more likely than men to graduate from college, allowing more of them to find higher-paying entry-level jobs. Controlling for education, college-educated men who work full-time earn 33 percent more than college-educated women full-time workers. Third, the good news holds only for young, unmarried, childless women. This might be a harbinger of good news if women were likely to remain single and childless for their lifetimes. However, almost all women marry and/or have children, both of which lower their earnings. Married women earn only 72 percent as much as married men, compared to an overall wage gap of 77 percent. Women with children suffer a wage penalty of 4 percent for the first child and 12 percent for each additional child—a penalty that is not explained by work experience, education, or other factors that affect pay.

The recent economic recession was dubbed a “mancession” because the male-dominated construction industry took the first major blow. But now it’s women’s jobs that are disproportionately on the line as cuts to professions such as education and nursing are becoming more frequent. Even as the unemployment rate has dropped again, to 8.8 percent for the general public, it’s still 12.3 percent for women who maintain families.

Women are also less likely to have jobs that come with important fringe benefits such as paid sick days and employer-sponsored retirement benefits. Without such benefits, women’s ability to save money for a rainy day is hindered, leaving them more economically vulnerable when they lose their jobs.

It’s time we realized that equal pay is a pressing social issue that affects not only women, but also families. Women’s incomes are critical to families’ economic well-being. The majority of married couples depend on earnings from women to support their households, and close to one-quarter of children live in single-mother families. Experts estimate that there would be at least a 50 percent reduction in poverty if women earned the same incomes as men in their field.

Imagine how much stronger families could be economically if the wage gap were eliminated. Perhaps the safety net would not have to be as wide. Perhaps fewer families would be facing foreclosure. It’s time that the issue of equal pay attract the attention that it deserves.  The economic strength of our families and our nation depend on it.

Dr. Mariko Chang is the author of the new book, Shortchanged: Why Women Have Less Wealth and What Can Be Done About It. She is also the main author of the Insight Center’s report “Lifting as We Climb Women of Color, Wealth, and America’s Future” and coauthor of "At Rope's End: Single Women Mothers, Wealth and Assets in the U.S." published by the Women of Color Policy Network. Dr. Chang has a PhD in Sociology from Stanford University and was an Associate Professor of Sociology at Harvard University from 1998 to 2007 where she published work on occupational sex segregation across countries, the use of social networks for gathering financial information, and began her work on the gender wealth gap. To help raise awareness of the wealth gap, she maintains a website that provides data and other information on wealth, assets, and debt for public policy makers, the media, researchers, and organizations that address economic security.