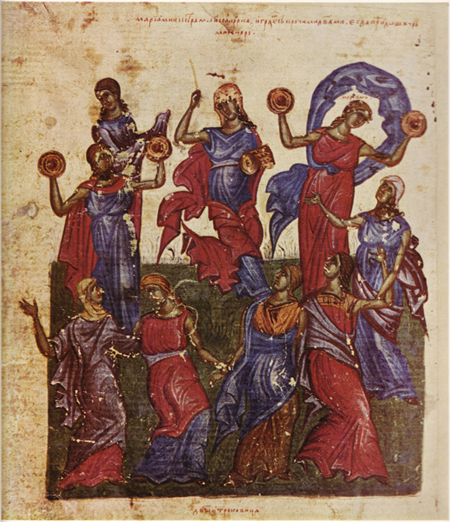 Unlike most religious events that require attendance at a synagogue, church or mosque, the Passover Seder–which was celebrated last night, and will be celebrated again tonight, by Jews around the world–remains at home, around a dinner table. That fact alone has always placed women in the center of the event—though that center often shifted to the kitchen, where gefilte fish, chopped liver and chicken soup with matzah balls were prepared with love.

Jewish women at Passover were directed into another “room” in other ways as well: Traditional Haggadot (the plural of haggadah, the book that serves as the seder script and retells the story of the Jews’ exodus from Egypt) were loaded with masculine God language and seemed to forget the women at the heart of the stories. But feminism changed that.

Some claim the first feminist Seder was held in Haifa, Israel, in 1975, an event which gave rise to the Woman’s Haggadah. But there were certainly earlier efforts, including the first feminist Seder at my home. At the urging of my sister and me, Mom opened the ping-pong table, covered it with an Indian bedspread and invited only women—her aunt, friends from work, plus a few of our college pals–to a second-night Seder dinner.

Our Seder was an escape of sorts—out from under the stern gaze of my Uncle Bill, who always led our family’s first-night Seder with an iron will and a humorless monotone. At our house, we served Aunt Eva’s guacamole instead of chopped liver and read from a different non-traditional Haggadah every year (including one “narrated” by a sheepdog).

Today, it’s easy to purchase a feminist Haggadah or a guide to creating your own, or to find a seat at a women’s Seder. Congregations, college campuses and communities of friends have restored women’s place in this celebration of liberation. And it’s quite a story. The book of Exodus tells of five courageous women who defied the Egyptian Pharoah: Shiphrah and Puah, the midwives who refused to destroy male Hebrew infants; Moses’ mother, Jochebed, who places her child in a basket of reeds to save him from death; Pharoah’s nameless daughter, who rescues the crying baby from the Nile; and Miriam, who watches over her brother Moses and later recommends his own mother to serve as the baby’s wet nurse.

Liberation, in the world of the feminist Seder, depends not merely on grand gestures like Moses demanding that Pharoah “Let my people go!” or dividing the Red Sea, but on what Susan Niditch in The Torah: A Women’s Commentary calls “a power rooted in moral reason, an ethical concern for life and the capacity to empathize.” The story, she writes, teaches

… a valuable lesson in political ethics: The very weakest in society can contribute to liberation by judiciously engaging in acts of civil disobedience.

Miriam is the most important figure in these Exodus stories. Mentioned in more biblical books than any other woman, she is honored as a prophet, a singer and a leader of women. Legend has it that along the journey from Egypt to freedom, the Israelites were sustained, both physically and spiritually, by a miraculous source of water that followed them across the desert, which became known as Miriam’s Well. And once the Hebrews crossed the Red Sea, Miriam led the women, “dancing with their timbrels,” in a powerful song of celebration. 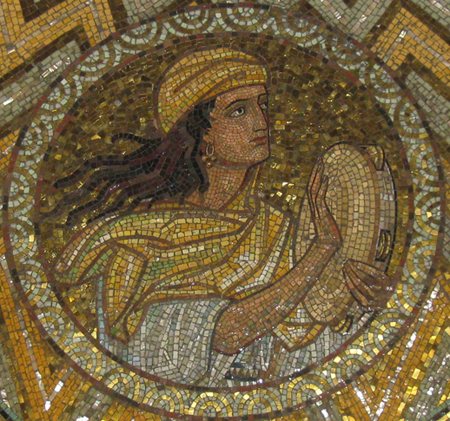 New prayers, poems and songs now celebrate women in the Passover Seder. Some bless and drink water from a symbolic Miriam’s Cup. Some place an orange alongside other symbolic food on the Seder plate to signify inclusion of groups once marginalized (like women rabbis, or gays and lesbians). A tambourine can recall Miriam’s song at the shores of the Red Sea.

If we can remember the story of the Exodus, Passover tells us, then we will never forget what it felt like to be oppressed, and thus we will remain committed to the liberation of all people under oppression. What could be a better feminist goal?

Top: Miriam’s Dance, Exodus 15:19: “Then Miriam the prophetess, Aaron’s sister, took a tambourine in her hand, and all the women followed her, with tambourines and dancing.” Photo public domain, courtesy of Tarnovo literary and art school.