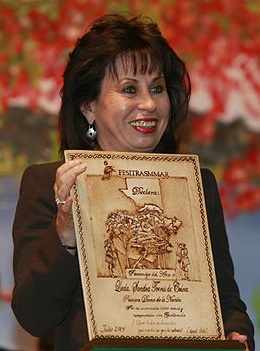 Last month, Sandra Torres announced that she was divorcing her husband, Guatemalan President Alvaro Colom, in order to run for the presidency herself. “I am getting a divorce from my husband, but I am getting married to the people,” she told reporters. The Guatemalan constitution bans the president’s relatives from running for office.

If Torres does get to run, and wins, would she be a champion for other women in her country? They sure could use one.

Guatemala was ranked 109 (out of 134) in the 2010 Gender Gap Index, a World Economic Forum report card tracking gender-based disparities in economic participation and opportunity, educational attainment, health and survival and political empowerment. In political empowerment, Guatemala ranks 116, largely because the nation has never had a female head of state.

Then there’s violence against women, which plagues Guatemalan society. As Pam Redela wrote in the Winter 2011 issue of Ms. magazine, femicide is a growing concern in the Central American country. And in March, PBS aired a two-part documentary highlighting the lack of women’s rights in Guatemala.

When women have been catapulted into the political limelight in other Latin American countries over the past decade, they have sometimes been a boon for other women.

During Michelle Bachelet’s tenure as president of Chile from 2006 to 2010, the number of nurseries and child-care centers in the country expanded by fivefold. She also created domestic violence shelters for women, allowed women to be admitted to the country’s naval academy and gave women the right to breastfeed at work. Now serving as the head of UN Women, Bachelet works daily to decrease gender disparity around the world.

Dilma Rousseff, who since January is serving as the first woman president of Brazil, has pledged to make government programs combating poverty favor women and single parent households. She’s also working to increase the number of women ministers in office and continues to support the Family Grant Program, which gives stipends to struggling families and sends their children to school. On the television show Mais Voce, Rousseff said,

What is most important about my being president is that now all girls can aspire to be president and it will be seen as completely normal in Brazil that a woman becomes president.

Of course, a woman in power is not a guaranteed feminist. President Cristina Fernandez de Kirchner of Argentina and President Laura Chinchilla Miranda of Costa Rica are not proclaimed as feminists and have enacted no pro-women policies. Yet it’s possible that just their visibility in a power position makes a difference for women, says Dora Barrancos, Director of the Interdisciplinary Institute of Gender Studies and Chair of the department of Latin American Social History at the University of Buenos Aires:

Cristina isn’t a feminist. But her stance on abortion [she’s opposed to it] doesn’t take away from the effort she put forward in her career. She may seem to be anti-feminist, but her very life–her success as a woman–is feminist.

Torres’ future is up in the air until Guatemala’s Constitutional Court decides if she can run. And if she’s allowed to, we’ll find out whether she’s a Bachelet or a Kirchner in the making.

Photo of Sandra Torres from Wikimedia Commons through Creative Commons.

Child Hunger Due to COVID-19 Cannot Be Ignored