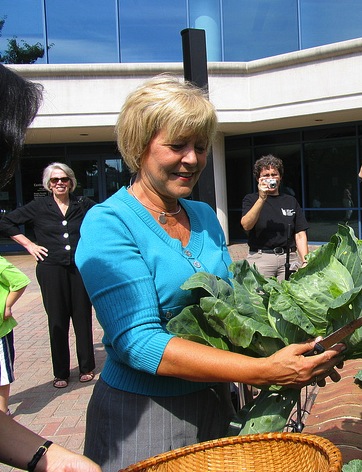 As the 2012 presidential race begins in earnest over the next few months, expect Iowa to dominate the news. The state’s caucuses on Feb. 6, 2012 are one of the first primaries in the nation, and lend candidates momentum (and donations). As of yesterday, however, there’s another election story coming out of Iowa that deserves attention: Iowa’s longstanding glass ceiling might shatter in November 2012.

Despite its feminist political credentials as home of women like Carrie Chapman Catt, founder of the League of Women Voters, and Mary Louise Smith, the only woman ever to chair the Republican National Committee, Iowa ranks with Mississippi as the only states to never have a woman serve as U.S. representative, U.S. senator or state governor. But Christie Vilsack is stepping up to challenge that record: She announced yesterday that she was forming an exploratory committee to study seeking the Democratic nomination for Congress in the redrawn 4th district (that’s politics code for: I’m running for Congress!)

Vilsack, wife of former Iowa governor Tom Vilsack (now U.S. secretary of agriculture), is a force to be reckoned with. A native Iowan with a lot of goodwill in the state from her time as First Lady, she was active in her husband’s gubernatorial run and worked for Hillary Clinton’s presidential campaign in 2008. She’s a prolific advocate for literacy and education and chairs the Iowa Initiative, which aims to reduce the rate of unintended pregnancies by increasing access to birth control options and family planning information.

If she runs, she’ll be campaigning against Rep. Steve King, an incumbent and tea party favorite who one imagines would not be hard to beat. This is a man who once called illegal immigration a “slow-motion terrorist attack,” and compared illegal immigrants to livestock. He argued that Planned Parenthood engages in “child prostitution and illegal immigration,” and that the organization’s practices are “ghoulish and ghastly and gruesome.” And the list goes on.

Even taking all that into account, Vilsack’s campaign will be no cakewalk. Iowa is notoriously unfriendly to Democrats (although redistricting based on the census may slightly alter that) and has never been a hospitable place for women running for office. As the Daily Beast’s Jill Lawrence explains:

Former Iowa Attorney General Bonnie Campbell experienced the problems up close and personal when she ran for governor in 1994. Some older, rural women “just didn’t want to vote for a woman,” Campbell said in an interview. Their attitude was that “being a mother and homemaker was good enough for me, why isn’t it good enough for you?”

The same problem cropped up 14 years later, when Campbell was making calls for Clinton before the Iowa caucuses, the community meetings at which Democrats signify their choices by standing together for various candidates. “I got Democratic women who literally said, ‘If I didn’t have to stand up in a room in front of my husband, I’d support Hillary Clinton, but I can’t.’ It was a stunning thing,” Campbell said.

However, Vilsack has some advantages. First of all, she’s starting out with high name recognition. Second, during presidential elections, a large voter turnout that tends to favor Democrats. If she can raise the money, Vilsack has a shot at winning where no woman has before.

Vilsack’s candidacy is important for more than just Iowa. Women make up only 17 percent of Congress and 23 percent of state legislatures. Among the world’s 189 countries with elected governments, America ranks 83rd in terms of number of female officials. We’ve seen the effects of that low ranking, as state legislatures around the country and the House of Representatives pass bills limiting women’s rights. Overall, women public officials make a difference [PDF]–they give priority to women’s rights policies, are more active on women’s rights legislation, are more likely to bring citizens into the process, are more likely to opt for government transparency and are more responsive to groups who previously were left out of the policymaking process. If we’re going to win this war on women, we need more than just lobbying and petitions–we need women on the floors of the House, the Senate and state legislatures, representing our interests and protecting our rights.

Christie Vilsack should run not just for the women of Iowa, who deserve a woman to finally represent them, but because one more woman in Congress is one more step toward parity. Vilsack said it best herself: “The more women running at every level, the better it is for all of us.”