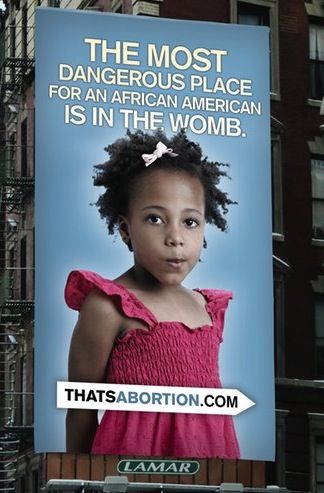 New York Daily News reported this morning that Tricia Fraser is suing Life Always, the anti-abortion rights group that used Fraser’s then-four-year-old daughter’s photo on controversial billboards in New York City and Jacksonville, Fla. The billboards, which were taken down after pressure from city officials and abortion-rights advocacy groups, read: “The most dangerous place for an African American is in the womb.”

Fraser originally asked for an apology from Life Always at the end of February, saying,

I was devastated that they portrayed her like that. I’m happy that it’s been taken down but at the same time, I am concerned that they can use it again.

A week later, Fraser told the Daily News that she still hadn’t received an apology.

The image used on the billboards was from a photo shoot with a modeling agency two years ago. While Fraser signed a release saying the images could be used as stock photos, Fraser’s lawyer says “the release was very clear that the image was not to be used in a way that would defame her daughter or hold her up to ridicule in public.”

Life Always put up the billboards “in honor of Black History Month.” Life Always board member Stephen Borden rationalized the campaign by saying:

We celebrate our history, but our future is in jeopardy as a genocidal plot is carried through abortion.

We have seen the heartbreaking effects of opportunists who happen to be black abortionists perpetrating this atrocity. It’s not just babies who are in danger; it’s also their mothers and our society at large.

Since the defamation lawsuit was filed, Life Always has not commented to the press.

Texas’s Abortion Ban Is Already Causing a Brain Drain in the State. Will Companies Speak Out?

Keeping Score: Breonna Taylor Portrait Unveiled at Smithsonian; Texas’s Unprecedented Abortion Ban; Half the World’s Children at “Extremely High Risk” from Climate Change
Debut Films “Aloners” and “Violet” Immerse Us in the Lives of Women on the Brink of Change
“Like We Do Not Exist”: Armenian Women Fight for Their Homeland