To Catch a Killer, Give Amnesty to Sex Workers - Ms. Magazine
Skip to content 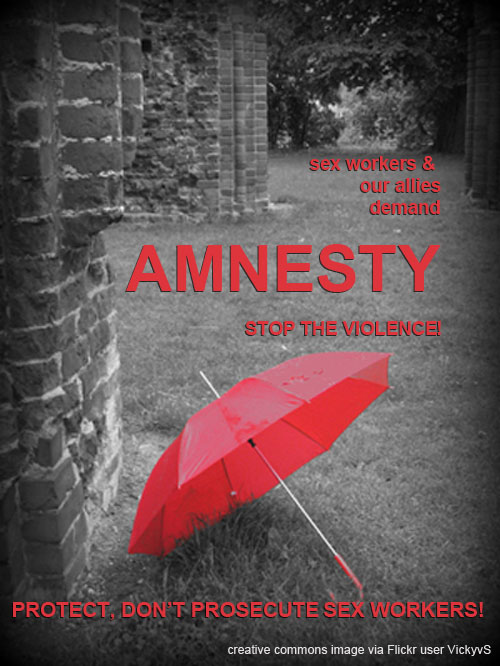 In the week leading up to December 17, 2010–the International Day to End Violence Against Sex Workers— the remains of four women, all of whom were involved with sex work, were discovered on a beach in Long Island. Since the end of March, the remains of six more bodies have been found in the same area. The Suffolk County Police Department have requested that anyone involved in the sex industry who may have information about the disappearance of colleagues come forward and share this information with the police.

However, the criminalization of prostitution makes it both unlikely and risky for sex workers to step forward. An individual who comes forward is essentially acknowledging her connection to criminal activity. And though the police have stated that their priority is to apprehend the serial killer, they are not backing off on busts for prostitution. An unnamed police source in Nassau County was quoted in Metro this week saying, “This serial killer isn’t causing us to crack down on prostitution. We’ve been cracking down a long time.”

Arresting people who are engaged in prostitution is not protection. Instead, arrests–and public knowledge of them–send a clear message that people engaged in prostitution will not have their safety or ability to make a living respected by the police. News of a continued crackdown makes it even less likely that sex workers with information about the 10 bodies discovered on Long Island beaches will come forward and share this knowledge with the police.

About two weeks ago, I launched a campaign to ask for temporary amnesty for prostitution-related convictions in Suffolk County (where the initial sets of remains were discovered,) so that sex workers will feel more comfortable providing information to the police. This is a crucial time for police to extend an olive branch to sex workers in Long Island. Law enforcement has so far not taken practical actions or shown great concern for people who, by necessity, continue to do transactional sex while a serial killer is active. It is vital that we let the police know that their actions are harming sex workers and making their own jobs more difficult.

Please sign this petition and join us in asking for temporary amnesty to aid in the capture of the killer and to help make sex workers safer.

Image from the Red Umbrella Project.

Audacia Ray is the director of the Red Umbrella Project, where she hosts a monthly live sex worker storytelling series in New York, which is documented as a weekly podcast, available for free on iTunes. She also leads storytelling and media training workshops and provides support for those who wish to tell their stories. Audacia is a former sex worker, the author of Naked on the Internet: Hookups, Downloads, and Cashing In on Internet Sexploration, and has been blogging about sexuality and culture since 2004. Additionally, Audacia is the Program Officer for Online Communications and Campaigns at the International Women’s Health Coalition, has consulted on information and communications technologies for the Global Network of Sex Work Projects, and was an executive editor at the Utne Reader award-winning $pread magazine for three years. She is based in Brooklyn.