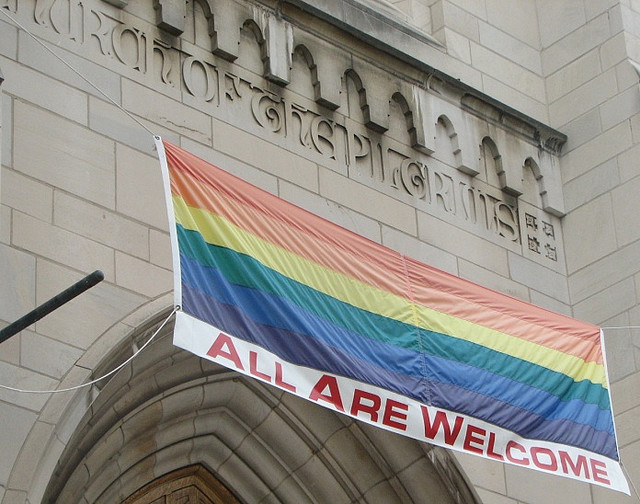 Last week, a small church in Kentucky renounced their right to grant marriages to heterosexual couples until full equality for same-sex couples has been legalized at the federal level. The congregation of Douglass Boulevard Christian Church (DBCC) voted unanimously for the church to stop signing marriages licenses.

In an interview with WHAS 11 in Louisville, associate minister Rev. Ryan Kemp-Pappan said,

As an open and affirming community of faith, our membership is committed to treating homosexuals and heterosexuals equally. Our congregation believes it is unfair to provide different services and benefits to heterosexual couples than we can provide to gay and lesbian couples.

Without a signature, a marriage license grants no legal rights to the married couple. DBCC will continue to offer religious wedding ceremonies, however, but couples will have to go to another house of worship or a government office to have their license signed and the marriage legally recognized .

We further heart the church for recognizing that “marriage,” as a title usually bestowed by religious institutions, should not necessarily define legal partnerships. Marriage equality encompasses an array of rights that currently only heterosexual couples get to enjoy. Senior minister Rev. Derek Penwell said in the same interview,

[Heterosexual couples] may inherit property, adopt children together, visit one another in the hospital and save thousands each year in taxes by filing as a couple. Ministers, as agents of the state, have the power to confer these benefits–and the imprimatur of normalcy–on heterosexual couples, but we do not have the honor to bestow these benefits on gay and lesbian couples.