Is "Gay" a Dirty Word in the Classroom? - Ms. Magazine
Skip to content 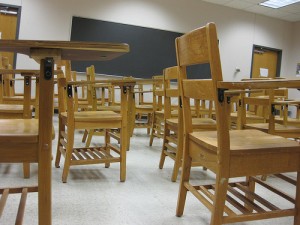 Picture this: Johnny, 13, lives in Tennessee. Sally, 13, lives in California. Both are in the 8th grade and both are questioning their sexuality. When Sally asks her teacher or counselor about being a lesbian, a new policy proposed by California lawmakers would allow for a healthy dialogue. But when Johnny tries to talk about his sexuality with his teacher in Tennessee, where new legislation would ban all discussions of homosexuality until after the 9th grade, he is silenced.

The proposed Tennessee bill (SB49) [PDF]–nicknamed “Don’t Say Gay”–was introduced April 20 by Sen. Stacey Campfield (R-Tenn.), who claims his bill isn’t anti-gay. It’s “neutral,” he says, since teachers are expected only to be silent on the subject, not “for or against” homosexuality. He himself isn’t neutral, however: In 2009, he compared homosexuality to bestiality and claimed it is a “learned behavior.”

But in California, the proposed legislation would require schools to add lesbian, gay, bisexual and transgender people to a list of groups that must be covered in social studies classes. At the same time, the bill prohibits the use of teaching materials that “reflect adversely” on the LGBT population.

Critics in California claim the curriculum is already over-crowded. They also complain that some parents may find the material offensive. But what is offensive about highlighting the achievements of important figures in history? The California law might lead teachers to tell students about Harvey Milk, for example, a politician who used his status to fight injustice and achieved remarkable results. The proposed law won’t require a lesson on what went on in his bedroom. In Tennessee, however, teachers won’t even be able to say the word “gay” if that state’s law passes.

Could horrific situations such as the deaths of Tyler Clementi and Matthew Shepard be avoided if we allowed for an open dialogue about sexuality? Stuart Biegel, a UCLA faculty member and author of The Right to Be Out, thinks so:

It is not possible to solve problems without being able to talk about them.

The most important step is to bring these issues and concerns out into the open … Addressing LGBT issues openly in a collaborative, professional and problem-solving manner can go a long way toward improving the lives of everyone in education settings.

Both the California and Tennessee bills will be up for a vote soon. If you live in Tennessee, email Sen. Campfield at: sen.stacey.campfield@capitol.tn.gov or call (615) 741-1766 to voice your outrage.