Not Your Mama's Memoir - Ms. Magazine
Skip to content 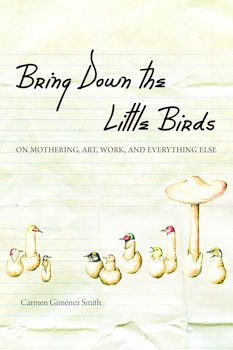 Popular mothering memoirs seem to fall into one of two categories. Either they subscribe to the humorous approach, in which the author focuses on the bodily functions, hormones and general hilarity of pregnancy and child-rearing, or they’re the heartfelt, saccharine, love-fest memoir (and yes, Jenny McCarthy has written books in both flavors). Refreshingly, Bring Down the Little Birds: On Mothering, Art, Work, and Everything Else (University of Arizona Press, 2010) by Carmen Giménez Smith, is defiantly, and transcendentally, neither.

Giménez Smith cites as motivation for writing her book the dearth of women of color writing mothering memoirs and the general lack of “sharp” writing about motherhood. Written as a collection of thoughts, questions, journal entries and narrative, Bring Down the Little Birds provides a disjointed, disarming view into Smith’s second pregnancy, which occurred at the same time as her own mother was diagnosed with a brain tumor. She explores her myriad feelings about her toddler son, her marriage, her mother’s failing memory, her new pregnancy and the state of her work (professor, writer, poet).

Smith writes lyrically, but does not mince words, and does not make her writing easy to digest. She’s honest. While she certainly waxes poetic about both of her children (e.g., “Fits me like a key. She’s my book,” about her infant daughter), she also sheds painfully bright light onto her ambivalence toward a second pregnancy and her need for time away from her young son.

She is nothing if not sharp, and that’s what’s most compelling about this book. In one train of thought, Little Birds deconstructs the male gaze as it subjugates pregnant women; in the next, she explores the secret lives mothers lead before giving birth (“Will they discover the notebooks in my study? Will they care?”). Such are the uncensored thoughts of a creative woman who happens to be pregnant, not a pregnant woman trying to be creative about it. At no point does it feel like Smith sat down to write a “parenting” book. Ultimately, she does the best thing a writer can do–she trusts her voice. She trusts that her point of view is fresh (it is), that her experiences and analysis are compelling (they are) and that her book will stand out in an often-misguided, cliché-saturated genre. Here’s hoping it does.