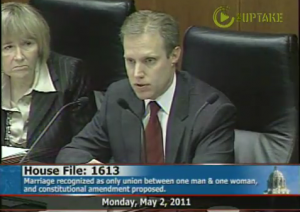 How many gays must God create before we accept that he wants them around?

Rep. Steve Simon (D-St. Louis Park) posed this question to his peers at a Capitol hearing on May 2 in a speech against a bill banning gay marriage in Minnesota. The bill (HF1615) would define marriage as a union between one man and one woman. If passed, the 2012 ballot may also ask voters, “Shall the Minnesota Constitution be amended to provide that only a union of one man and one woman shall be valid or recognized as a marriage in Minnesota?”

Separation of church and state? Obviously not important for bill author Rep. Steve Gottwalt (R-St. Cloud) and the supporters of the new bill. But Rep. Simon made sure to mention it in his speech during the hearing. He asked his peers to consider the nature v. nurture argument, challenging them to consider the possibility that being homosexual is not a generational fad.

We have to be careful about trying to enshrine our beliefs, however religiously valid we may believe them to be, in the Minnesota Constitution. What I’m hearing today, and what I heard on Friday, was largely a religious justification for a change in the Minnesota Constitution. I don’t think that’s right. I don’t think that’s fair. …

I’m comfortable with a society and a tradition that bends towards justice, fairness, wholeness, openness and compassion, and I do think that that is where the arc of history is bending as well. … If we pass this, if we put it on the ballot, if this becomes part of our Constitution, history will judge us all very, very harshly.

Minnesota has been a leader in the anti-gay movement since the early 1970s. In 1971, the state became one of the first to ban gay marriage. Now, with a majority in the state legislature, Republicans are hoping to make it a Constitutional law. Never mind the fact that the Midwest state has yet to pass a balanced budget plan for this year. State Republicans, like their national counterparts, will attack any social program or minority that they think can boost their conservative street cred.

This bill is yet another frightening example of the lengths the GOP will go to further segregate a minority in America. Thankfully, representatives like Simon will continue to fight discriminatory legislation. If you would like to e-mail Minnesota’s representatives and urge them not to pass HF 1615, go to this site. We recommend e-mailing the author of the bill, Rep. Steve Gottwalt (R-St. Cloud) at rep.steve.gottwalt@house.mn or calling him at 651-296-6316. Let him know that we like our legislation to be discrimination-free.

Image is a screenshot of the video.