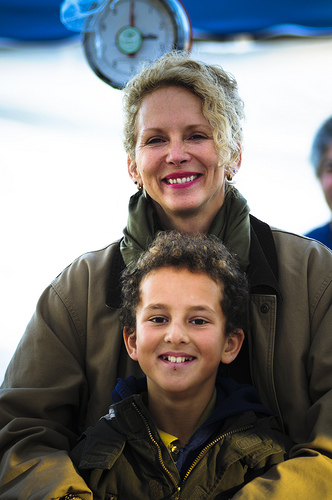 In Part 1, I figured out how to be both a good mother and a good professor.

Even though being out of the mom closet seems to be more acceptable in academia these days, there are nevertheless those higher up–deans, provosts, presidents–who one hesitates to tell. While society seems to believe a male can do any job and be a father too, a woman’s job is often endangered when she becomes a mother. Any weakness is invariably blamed on the fact she is a mother, while the strengths, widening perspectives and multi-tasking mastery she gains from motherhood are rarely acknowledged.

But I refuse to pretend any longer that I can’t be both a good mother and a good professor. I have also learned that there is no need to give up my feminist activist hat. If anything, being a mother has made me more of an activist. I now feel obligated to raise my children to be activists in their own right and to be, as the well-known Gandhi quote prescribes, the change they want to see in the world. Thus, on the drive to school, at the dinner table, while grocery shopping or at the park, we discuss politics. We analyze sexism in television and movies, homophobia on the playground and racism in music lyrics. Not a day goes by that politics is not part of my mothering.

In fact, I now realize that while I feared my feminism had gone dormant in those early years of being a mom, my politics has affected the way I parent since the day my children were born. From refusing “gender appropriate” toys to my deliberate attempts to use the same tone of voice, the same type of compliments and the same frequency of touch for both my daughter and son, I tried to treat them both as equally human–rather than as “girl” and “boy.” As they’ve gotten older, I encouraged them to have friends across gender, race, class and ability (a feat our segregation-happy society certainly doesn’t make too easy). Once they entered educational institutions, I quickly became the mother every teacher dreaded–the one who brought in studies on linguistic theory showing the detrimental effects of always using male pronouns, male examples and putting males first (as in the ubiquitous “boys and girls”). The one who was at the principle’s door the minute she heard the term ‘faggot’ and ‘lesbo’ were being used by the 3rd graders to insult one another. The one who complained each year over the way Thanksgiving was presented–“No, kids, the Native Americans were not so happy when the pilgrims arrived.” The one who has her son bring in Cesar Chavez posters with a prepared speech to supplement the curriculum, and whose daughter refuses to partake in any “boys against girls” activities.

My maternal activism spreads beyond institutionalized education though. For example, one memorable encounter happened at the local roller rink just after the “all girls” and “all boys” skating times. One of my son’s friends is a female who identifies as male, but, due to her parents insistence, still “looks like a girl.” You can imagine the befuddled response of the roller-rink manager when I insisted that segregated skating enforced gender norms and isolated youths not identifying with their given gender. When he said that this policy could not be bent even this once, my son and I decided he should skate during the all-girls skate just to see what would happen. Even though he was wearing one of his signature pink t-shirts, the skate referees were on him in no time, whistling up a frenzy. I won’t forget how angered he was over our failure to win this fight.

“It’s ridiculous mom,” he fumed. “Who cares if a boy wants to skate during girl time or vice versa? Those rules are stupid.” However, though we lost the roller rink war, the bigger battle is being won on a daily basis–the battle of teaching my son and daughter about the injustices of the world and the necessity of fighting them, even when we won’t always win.

Our longtime girl-and-boycotting of Wal-Mart may be one of these battles that will be a long time in the winning. When the kids were younger, they would tell me how such and such toy would be cheaper if we got it at Wal-Mart, how all their friends shopped there, how the teachers recommended it for school supplies. However, as I have supplied them with more and more facts about unfair working and wage conditions, they became as resolute as myself that we should not shop there, and now also actively encourage others not to do so. In fact, when visiting Grandma a couple of summers ago, they gave her a 30-minute lecture regarding the evils of Wal-Mart after she took them there for some beach toys. “Mom, Grandma made us go to Wal-Mart,” was how my 7-year-old daughter greeted me when she got off the plane. “We’re sorry. She made us go in. It was awful.”

And my son is no stranger to feminist analysis. After seeing Shrek 3 he mused, “Know what I really liked about that movie, mom? I liked that they made the females strong. Fiona and all the others, they kicked butt. Why don’t they make all movies like that? It’s dumb they always make the boys the strong ones.”

In moments like these, I feel in my gut just how political the maternal is. It is the politics of raising a feminist son who not only analyzes big, outer world issues, but who also daily looks through the world via a feminist lens in order to critique everything from cartoons to the actions of his schoolmates and teachers. It is the practice of raising a daughter, who, at age seven, decided to petition Nintendo to rename “Gameboy” into “Gamekid.” “To convince you that I am not the only one who feels this way,” she wrote, “I have gathered 142 signatures below.”

Maternal feminist politics, I now happily realize, infuses the day-to-day mothering of my kids, as well as my voting choices, my teaching practices, my scholarly work, my buying practices and my language choices As a mother, I have never really taken off my feminist lenses. They may have become fogged for a while, but now I see clearly that motherhood and feminism coexist beautifully and are, in fact, more powerful together than apart.

The Crime Hidden in Plain Sight: An Interview with Amy Ziering, Director of ‘Allen v. Farrow’

A New Era for Women: Biden’s Plan to Invest in Workers and Families