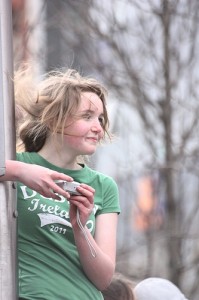 The 20th century Ireland of my mother’s childhood was marked with class distinction, the stigma attached to poorness inescapable. The Catholic Church influenced everything. Irish children attended Catholic schools where nuns, priests and brothers often stifled potential and crushed dreams.

There was much these children had to overcome. My mother was born a lefty, but in Catholic school in Ireland writing with your left hand was sinful, so the nuns beat her left knuckles raw. Soon she was permanently righteous.  Her sister Angela mispronounced a word while reading out loud in class. The nun, so frustrated with the nine-year-old’s incompetence, shoved the book hard into Angela’s face. The glasses she wore shattered and cut into her cheeks and eyelids. Angela never volunteered to read in class again.

My mother’s other sister, Rose, was late to school one wet Irish morning. The nun told her not to come to her class late and slammed the door in her face. Eight hours later, when school was dismissed for the day, Rose was still outside in the rain. The nun had forgotten about her. Rose developed a cold that turned into pneumonia. She suffered hair loss from the stress. Hair grows back, but self-esteem doesn’t regenerate so easily. Seamus, the only boy in the family, rarely mentions his school days.

Years later, in their early 20s, my mother and Angela hitchhiked across Europe. They stayed in Madrid for a while and got jobs in a bar. One night, an airman in the U.S. Air Force,walked in and ordered a gin from the cute Irish bartender. My mom and dad were soon married and moved to the United States; they celebrated their 38th wedding anniversary in March.

I grew up visiting Ireland every year and hearing my mother, her four sisters and one brother reminisce all night with stories from their Irish Catholic childhoods.  “You can sleep when you’re dead,” my Uncle Seamus would tell his sisters, urging them to stay awake. “Have another drink.” They chatted into the morning, telling hilarious stories with renowned Irish wit. But behind their deep-set eyes I could see sadness. It was clear that emotional scars remained.

When I ask my mother why she left Ireland, she hesitates and then says, “It took me years to understand why I left. I suppose I wanted to live life on my own terms. I’d always be stifled as Bernie McGovern in Ireland. When I landed on American soil, I was Bernadette San Pietro. I redefined myself.”

My mother ingrained in my brother, sister and me a strong work ethic, high standards and an appreciation of the importance of education. Giving up wasn’t allowed, laziness prohibited. But my mother always encouraged us. Remembering her Irish Catholic school, she said, “If we didn’t do well, the nuns humiliated us. If we did do well, they accused us of cheating and humiliated us anyway. They made us feel worthless. I didn’t want that for my children.”

Growing up, I was engrossed in sports and academics. My mother cheered from the bleachers of every basketball and soccer game I played. She saved money so I wouldn’t miss expensive camps or tournaments.

As a high school senior, I got accepted to attend the Air Force Academy. But when I quit the basketball team to focus on academics following my freshman year, my mother and I didn’t speak for three weeks—the longest we’d ever gone without words. When we finally spoke, she burst into tears, the first time she had cried openly in front of me. My heart sank. At the time, I didn’t understand why an orange ball and a couple of nets mattered so much to her. It wasn’t as if she had played the game. But that was just it: To her, my playing basketball was symbolic of the opportunities she had never had.

A few years later, I walked across the stage at Falcon Stadium in Colorado Springs and saluted then-President George W. Bush. After the last graduate’s name was called, Thunderbirds roared across the clear blue sky. About a thousand brand-new second lieutenants threw their hats in the air and rushed the stands toward friends and family. I was overwhelmed with sadness, excitement and relief.

When I finally found my mother in the stands, we both broke down crying. We knew we were celebrating much more than my graduation.

In Angela’s Ashes, Frank McCourt’s mother says to him, “Don’t let anyone ever slam the door on you again. Do you hear me?” My mother taught me never to let a door slam in my face. To me, that is what it has meant to be an Irish-American, but more importantly, my mother’s daughter. My graduation day was as much a success story for her and her generation as it was for me and mine.

Photo of Dublin girl by Flickr user chacrebleu, under license from Creative Commons 2.0