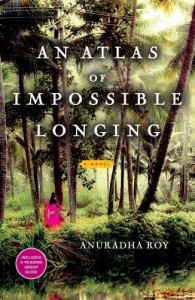 Anuradha Roy’s debut novel, An Atlas of Impossible Longing, has much to boast about. Published in the UK and India in 2008, and just recently in the U.S., it was named one of the 60 most essential books in contemporary India by World Literature Today. Its reviews stateside and abroad have been glowing and well-deserved, and its author can anticipate what is sure to be a stellar career as a novelist. But, surprisingly, this gorgeous, sweeping novel, set over three generations of Bengali history, doesn’t boast at all. It is the quietest epic I have ever read.

Roy’s confidence shimmers on the page, from the first crystalline, haunting image of a drowning house to the heart-wrenching conversation that takes place in front of it 50 years later. She has set for herself an immense project, choosing a period in India’s history that includes Partition (the separation of India from Pakistan) and Independence (the official concession of British colonial rule in India), but doesn’t let history get in the way of a precise, character-driven narrative.

Roy is a master of description: The dirt roads, jungles, open fields, abandoned forts and old-age homes where her subjects’ lives unfold  are characters themselves. The view from a train window, described often by Nirmal, one of the book’s narrators (the book spans multiple generations and is written in three distinct parts), takes precedence. So, too, does the scent released by blooming jasmine after monsoon season. And we’re captivated by the story of an elderly woman who develops a Tourette-like verbal tic and is confined to her room for decades, growing imperceptible from her home-space.

An Atlas of Impossible Longing ties the story of people inextricably to natural disasters, both geologic and emotional. An earthquake occurs at the precise moment when two people realize that their love for each other is not unrequited; a baby is born in the midst of deadly flooding; an illicit affair ends with a murder. Roy’s characters are always tied up in things–their homes, the seasons, their country, each others’ lives–but they are not tied up in the churning of history in the distracting way of much postcolonial fiction.