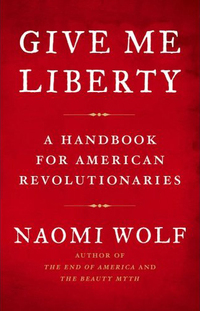 Late last year, when WikiLeaks founder Julian Assange was accused of rape by two women, noted feminist and one-time anti-sexual-violence advocate Naomi Wolf brazenly denied the accusations, outraging feminists everywhere. As the story broke, I was just picking up Wolf’s 2008 book, Give Me Liberty: A Handbook for American Revolutionaries. What I discovered was, in fact, deeply revealing of Wolf’s priorities. Spoiler alert: Feminism is not at the top of that list.

Give Me Liberty was inspired by Wolf’s personal confrontation with the U.S. Constitution and Declaration of Independence. What she found in reading the democratic tomes, and what she implores her readers to find for themselves, is a radical series of documents demanding (not encouraging, demanding) a state of unending citizen uprising. That brings Wolf’s fierce defense of Assange, whose organization operates on the principle that ordinary people should be privy to everything their elected officials are up to, into sharp focus.

The book is a manifesto on the reclamation of democracy. An entire chapter of this book is called “We Must Speak.” In it, readers are instructed to “protest and assemble” when a “desire for liberty burns in you as it did for the founders.” But when two women spoke out, alleging sexual assault by Assange, Wolf took to The Huffington Post, writing that the women’s claims were a front for “personal injured feelings.” Later, she declared that Interpol’s hunt for Assange was an “insult [to] rape victims worldwide,” calling Interpol the world’s “dating police.” Despite her feminist roots, Wolf proved that her thirst for democracy is incompatible with her ostensible dedication to women’s rights.

The last third of Give Me Liberty is truly meant to be a handbook for American revolutionaries, with Wolf reminding American citizens of the many political tools at our disposal, such as leading a protest, running for office, speaking out or starting a non-profit. But last December Wolf openly disputed two women’s attempts to wield those tools. The question we’re left with, then, is can we, the people, accept that?