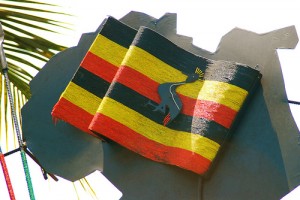 Hundreds of Ugandan women marched for justice and peace on May 9 in a protest against rising food and fuel prices and recent brutality by police and other security operatives. Wearing white for peace, they carried empty saucepans with holes, mingling sticks and wooden spoons, which they banged as they walked from Kiira grounds to Yusuf Lule Road and then back to Kiira grounds in Kampala, Uganda’s capital.

The women carried placards urging government action on inflation and recent brutality against “Walk to Work” campaigners, who have been walking to work to protest high fuel prices. The placards displayed demands such as: “For a country without bread, bullets cannot be food,” “Stop shooting our babies,” “Women of Uganda want peace,” “Fuel prices must go down” and “Respect women’s bodies during arrests.”

They spoke out against the violence that has grown rampant here since mid-April, when Ugandans began protesting inflation with Walk to Work days after a call for peaceful change in the management of public affairs by Activists for Change, a nonpartisan nonprofit organization. Government forces have killed about 10 people during these protests, according to Human Rights Watch (HRW). Police acknowledge that more than 100 people have been injured and more than 600 arrested countrywide since April, according to HRW.

Maj. Gen. Kale Kayihura, inspector-general of the Uganda Police Force, has appeared on television to say that police have been responding to Parliament’s call to restrain in brutality while handling demonstrators. Local police have been silent on the issue.

The women organized the march to express their condemnation of both the violence and the inflation. Other groups and opposition leaders have also been protesting. Recently sworn-in president Yoweri Museveni has repeatedly said that protesters won’t topple his government, which human rights defenders say should launch an independent investigation into the police brutality.

Now at 14.1 percent, the consumer price index has more than doubled since February, when it was 6.4 percent, according to the Uganda Bureau of Statistics. The cost of maize, a staple food, has increased by 114 percent during the past year, according to an April World Bank report.

Many people have blamed the soaring prices on the government’s extravagant spending. Campaign spending is not officially reported here, but Andrew Mwenda, editor of The Independent, a weekly Ugandan magazine, estimated to Foreign Policy magazine that the ruling party, the National Resistance Movement, spent approximately $350 million–largely of state funds–to secure the presidential seat in the February elections. Meanwhile, UNICEF reports that more than half of Ugandans live below the international poverty line of $1.25 per day.

The march aimed to register women’s concern and condemnation of the excessive use of force in dispersing people protesting against inflation. The statement circulated before and during the demonstration reads:

We have witnessed a series of disturbing events in which we have seen the state and its law enforcement agencies respond in a brutal and often excessive manner to citizens’ demand for government action to address increased prices, cost of living, poverty, inequality in distribution of resources, corruption and the apparent disregard of pressing priorities in allocation of government expenditure.

One activist, who declined to give her name for security reasons, says they have no one to turn to for help:

We call upon the government that women of Uganda are tired of tear gas, violence, and we are scared of police. We cannot run to them when we need help.

Lawyers from the nonprofit International Federation of Women Lawyers reminded the government of the constitution. Says one lawyer, who also declined to give her name for security reasons,

The state is obliged to respect, promote, protect and fulfill the rights of its citizens as enshrined in the 1995 constitution and other regional and international treaties to which Uganda is signatory.

And another lawyer who declined to give her name for safety reasons called for the government’s “respect of the rule of law and the court. Otherwise Uganda is heading towards a failed state.

Before the march, police warned the women to not make any political statements. Says activist Jessica Nkuuhe,

Other groups have also been protesting.

Earlier this month, more than 300 lawyers organized a three-day strike against the police’s violent response to protests against rising food and fuel prices. They said the brutality infringed on the rule of law and the independence of the judiciary. They also spoke out against the arrest of opposition leader Kizza Besigye, who has been arrested several times for leading Walk to Work protests.

Museveni has said multiple times that demonstrators will not overthrow his government, which has been in power since 1986.

Rita Achiro, executive director of Uganda Women’s Network, an advocacy and lobbying network, says this march did not aim to threaten the government. She says it was rather a peaceful show of the women’s demand for the government’s accountability. As the women’s statement reads,

This is not a politically motivated march, and that is why we are dressed in white because white shows peace. We demand strong policy measures to address issues of food security, unemployment, health and education.

The women later handed the statement to Margaret Sekaggya, a Ugandan lawyer and current U.N. special rapporteur on human rights defenders, who was at the demonstration. Sekaggya promised to send the statement to the United Nations Commission on Human Rights in Geneva, Switzerland.

Meanwhile, in a report issued this month, HRW urged the Ugandan government to launch a “prompt, independent, and thorough investigation” into police brutality in handling demonstrators. The report advised the government to ensure that fundamental rights such as the right to freedom of assembly and expression are protected and can be exercised without risk of censor.

“Our hearts are bleeding,” says one activist, who declined to give her name for security reasons, at the march. “We do not have food because we are teargassed and shot at for demonstrating.”

Photo of Uganda flag in Kampala from Flickr user Michell Zappa under license from Creative Commons 2.0

Beatrice Lamwaka is a teacher and writer. She graduated from Makerere University with BA (ED) Literature and English Language Studies. Her published works include "Vengeance of the Gods," a short story Published in ‘Words From A Granary’ An anthology by Ugandan Women Writers. ’Queen of tobacco’ Gowanus Books. Her poems have been published in various anthologies. She is one of the pioneers of a British Council writing scheme to link Ugandan writers with established writers in the UK. She is a member of Transcend Art And Peace (TAP) an organisation that supports creativity and art in working for peace. She is also a member Of Uganda Women Writers Association. Her Novella ‘Anena’s Victory’ is awaiting publication with Fountain Publishers. She is currently working on her first novel ‘Second Home’. She works with Uganda Bureau of statistics.

Global Women’s Assembly for Climate Justice to Coincide with U.N. General Assembly: “Life Itself Hangs in the Balance”

The Taliban Further Tightens Its Grip on Afghan Women and Girls: “These Young Women Have Fought for Themselves”
U.S. Health and Human Services to Protect Texas Abortion Patients and Providers: “We Have Your Back,” Says Secretary Xavier Becerra
Taliban Ban Girls From Returning to Secondary School: “Like Burying Them Alive”