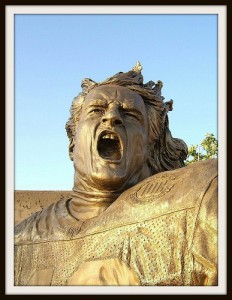 If you want to honor soldiers and their families this Memorial Day, watch The Tillman Story. I caught it the other night “on demand” from my cable TV system. It’s mesmerizing, horrifying and, in some ways, inspiring.

You probably already know the outlines of the much-reported story: Professional football player Pat Tillman decided to chuck the NFL and join the U.S. Army after 9/11. He was sent to Iraq, then Afghanistan. While on a patrol in Afghanistan in 2004, his unit came under fire and he was killed. He was 26 years old.

It was a tragedy; by all accounts Tillman was an amazing young man, in equal measures brave, inquisitive and humane. But that tragedy was compounded by what the military and the U.S. government did after his death: They turned it into a heroic sideshow rather than admitting, as was known almost immediately, that Tillman had been fatally shot by his fellow U.S. soldiers. “Friendly fire,” they call it.

And then, after withdrawing the fiction that Tillman had been leading troops in battle against “terrorist” forces when those bad guys ended his life, the top brass took no responsibility for the coverup. Even if you already despise Donald Rumsfeld (who never served in a war himself), the bile will rise to new levels when you watch the former Defense Secretary’s “I don’t recall” testimony before Congress and, afterwards, his slap-in-the-Tillmans’-faces smiling banter with the generals who testified of their similar forgetfulness.

Pat Tillman, you learn in this story, was indeed a hero—but not for what he did on the battlefield. One might question why he felt compelled to join the military after 9/11—my sense is that he felt somehow guilty that he was “proving” his masculinity in the faux-war setting of a football field, and that the only real test of manhood was in life-or-death service. Or, as former military man Stan Goff, who helped the Tillman family unravel the crazy-quilt of information they were given, put it, Pat had a “sense of ethics that will not substitute words for deeds.”

Pat’s dedication and sense of responsibility were real–but so, too, as was his disgust with the Iraq war once he became part of it. Tillman may have been a gung-ho athlete and risk-taker, but his mind was equally active (he read Noam Chomsky, among other authors), and he discovered the truth of U.S. involvement in the country firsthand. He called the war “fucking illegal” and urged fellow soldiers to vote George W. Bush out of office. Is it any wonder that his journal mysteriously disappeared after his death?

The other real hero of this tale turns out to be Pat’s mother, Dannie, who has also written a memoir. Unwilling to accept the government’s story, she was unrelenting in her search for the truth about her son’s death, poring through stacks of heavily redacted evidence the Army gave her, trying to fill in the blanks. She took her case all the way to a congressional hearing room, where she still got no satisfaction, other than knowing that she’d done all she could. In the film, she says, simply, in a soft and youthful voice that belies her strength and rage,

What they said happened didn’t happen. You have to set the record straight. …

The myth of war and patriotism is that all the bravery is on the battlefield. What you’re left with after watching The Tillman Story is respect and admiration not for the military but for the Tillman family, and renewed disgust with George W. Bush and his administration.  The cowardice and self-serving manipulation at the highest levels of the federal government, and in the military under Bush’s watch, is nauseating.

Photo of Pat Tillman statue outside Arizona Cardinal stadium by Flickr user Tony the Misfit, under license from Creative Commons 2.0