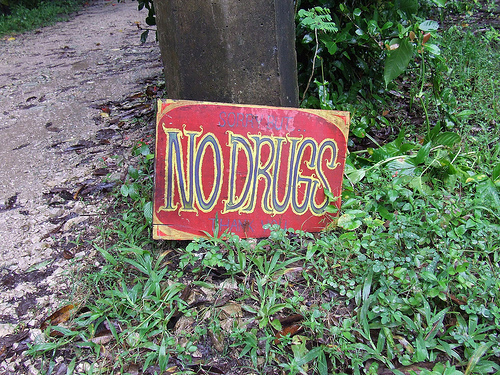 I was called to jury duty last week at federal court in Los Angeles. Thirty-five prospective jurors were asked if they could fairly judge a man accused of selling a “small amount of a controlled substance”–crack cocaine–to an undercover cop. (In total, six undercover cops worked to bring this guy down!) When asked in voir dire if I objected to the charges, I said,

I think it’s a waste of money for a jury, a DA, a judge and all these cops to spend days on this minuscule salvo in the War on Drugs, when L.A. does not prosecute rapists in any meaningful way. Isn’t the War on Rape as important as the War on Drugs?

I was thrown out of the jury pool.

President Obama’s drug czar, the conservative National Review and scores of police officers have declared the War on Drugs a total failure. The War on Rape does not even exist. I Googled both, and found countless War on Drug references, but I found nothing about the War on Rape. Rape during war, yes. But not a word about a war on the one-in-six-women-will-be-raped-in-the-U.S. kind of rape.

I have written short films about the lack of rape-kit testing in L.A. I have cried, screamed and overeaten because the truth is unbearable: Of the rapes that are reported to police, only 6 percent will result in a rapist spending a single day in jail.

I called Patricia Doyle, a prosecutor in the Los Angeles District Attorney’s Sex Crimes unit, to find out what the problem was. She says they are numerous. Even though the LAPD says it has eliminated its backlog of hundreds of untested rape kits (unlike most U.S. cities), Doyle explains that DNA from these rape kits is no guarantee of a conviction. The perpetrator’s DNA may not be in the data bank, in which case they can’t find him. And the DNA only proves that he had sex with the woman, but does not prove it was non-consensual. Worse still, in a campus rape, or acquaintance rape, (this is the prosecutor’s position, not mine), the issue of whether the woman was drinking or seductively dressed really is a focal point for the defense of the rapist. Doyle agreed with me when I said, “If a woman goes to the police in a short skirt, having had a few drinks, and claims her Mercedes was stolen, nobody questions her outfit or alcohol intake. But tell the police you were raped and you stand trial along with your rapist.”

Discouraged by this information, I spoke with Los Angeles-based criminal defense attorney Art Goldberg. He agreed with the prosecutor’s assessment but offered a solution: Law enforcement and prosecutors need to re-order their priorities so they spend more time and money finding the evidence to convict rapists, and stop wasting tax payer money on non-violent crimes.

Isn’t a woman’s body and sense of safety more valuable than a Mercedes? Or even a Rolex?

The LAPD is bullish on catching drug dealers, they must develop the same zeal for stopping those who commit violent sexual acts against women, children and men.

I want to be a soldier in the War on Rape. I want to take rapists out of circulation. I want them never to rape again. That’s a jury I would like to be on.

To learn how to take action to help end the rape kit backlog, visit the Feminist Majority’s No More Excuses Campaign homepage.