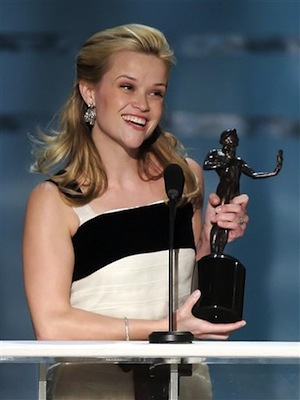 On Sunday night, Reese Witherspoon, an Oscar winner, accepted a very different kind of award: the MTV Generation Award in Los Angeles. Witherspoon, 35, took the stage, teased Robert Pattinson, then offered the usual celebrity thanks. So far, so good. But then her speech took an unexpected turn:

I want to say to all the girls out there, I know it’s cool to be bad, but it’s also possible to make it in Hollywood without a reality show … When I came up in this business, if you made a sex tape, you were embarrassed and hid it under your bed. And if you took naked pictures of yourself on your cell phone, you would hide your face, people. Hide your face! … So for all the girls out there, it’s possible to be a good girl. I’m going to try to make it cool.

﻿To be sure, Witherspoon’s speech addresses a real concern. Unfortunately, there are real-world consequences for girls–celebrities or not–who are caught with sexualized photos or tapes. The reality is that nude photos are used against people of all ages when applying for jobs or child custody, and teenage subjects of such photos have even been brought up on child pornography charges. And the damage to reputation can cause real pain. In 2009, 13-year old Hope Witsell committed suicide after a topless photo of her was shared with her classmates.

But here’s the thing. Hope Witsell didn’t commit suicide just because nude photos of her were released–she committed suicide because of the slut-shaming that followed. Fellow classmates bullied her with shouts of “whore” and “slut” as she walked to class. Her friends couldn’t protect her and her school made little effort to end the harassment. As a result, the young and troubled teen felt she had no choice but to end her life because things at school seemed as if they were never going to get better.

Leora Tanenbaum, author of the best-selling book Slut! Growing Up Female With a Bad Reputation, explains how drawing the line between “good girls” and “bad girls” feeds into the mentality that led to Witsell’s suicide:

The school’s reaction reinforced the belief that [Witsell] was deserving of punishment rather than understanding … But when it comes to being a victim–of slut-bashing or anything else–the distinction between worthy and unworthy is meaningless. Worse, this distinction is harmful. The mindset that leads to discriminating between ‘good’ and ‘bad’ victims is the same mindset that leads to judging girls as ‘good’ or ‘bad.’

I can’t help but recall a very different lesson in Witherspoon’s 1999 high school drama Cruel Intentions, where she played Annette, a virginal headmaster’s daughter, pitted against the “slut” Kathryn (Sarah Michelle Gellar). Annette struggles with the decision to have sex, but it’s Kathryn who points out the double standard facing girls: “﻿God forbid I exude confidence and enjoy sex. Do you think I relish the fact that I have to act like Mary Sunshine 24/7 so I can be considered a lady?”

If we are dedicated to promoting the collective power of girls and women, we cannot police their sexuality in an attempt to make girls “good.” For girls like Hope Witsell–whose photos were released to classmates without her consent–we need to offer support and encouragement rather than exhorting her to be a good girl. Ultimately, we would be wise to heed Tanenbaum’s words, not Witherspoon’s, because a world without slut-shaming is one that’s “good” for everyone.