Recently, a New York City police officer was charged with raping a drunk and comatose woman while his partner stood watch. The two were cleared of rape charges, to feminist outrage, but the fact that the officer crossed sexual boundaries with a very intoxicated woman was undisputed (he admits to kissing her shoulder).

In Chicago last year, 20-year-old Tiawanda Moore reported that when an officer was called to her apartment on a domestic-violence complaint, he groped her breast and handed her his personal phone number.

When Moore went in to the station to file a sexual-harassment complaint against the offer, she says Internal Affairs officers told her not to bother. They began to threaten her if she insisted on going ahead with her charges. Moore got scared so she turned on the recorder inside her Blackberry, and captured their threats with her phone’s recording device. 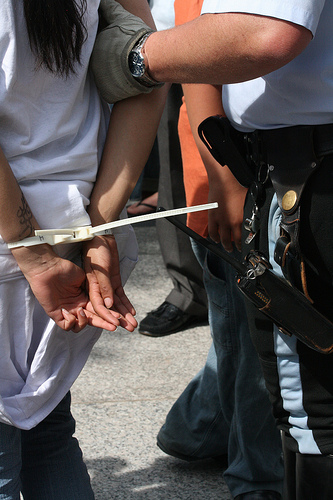 When the officers realized they were being recorded, they arrested Ms. Moore and dumped her into the Cook County Jail. Illinois has a very tough law against recording a conversation with any law enforcement official without their knowledge. The law protects police and DA’s from being entrapped–but also violates the First Amendment, according to the ACLU in Chicago. Now out of jail, Moore faces 15 years in prison on charges of “eavesdropping”: The same penalty for rape in Illinois. And the cop she claimed grabbed her breast? No charges were brought against him. None.

Meanwhile, in 2004 in Orange County, California, a police officer pulled a woman over for a traffic stop, then masturbated and spilled his semen onto her.

In court, the police officer admitted to ejaculating on the woman, but his defense attorney, had a handy explanation ready: “She got what she wanted,” and furthermore, “She’s an overtly sexual person.”

A jury of 11 men and 1 woman acquitted the cop. His attorney had successfully demonized the victim, asking her about her part time job as a stripper: “You dance around a pole, don’t you?” Superior Court Judge William Evans ruled the question irrelevant. But the defense attorney pushed ahead–the judge did not stop him when he rephrased, “Do you place a pole between your legs and go up and down?”

Moore had no more legal success in Chicago. She and her attorney tried to get the charges against her dropped by going to court, but she was turned down. Not only did the federal court judge refuse to dismiss the eavesdropping charges, the judge also turned down her request that the officer be held accountable for his alleged inappropriate sexual behavior.

Here we have two young women, both strippers, treated unacceptably by police. Neither cop is being held accountable. One of the women awaits trial and faces serious jail time, the other woman was humiliated twice: Once when a peace officer ejaculated on her, and again when a jury let him get away with it.