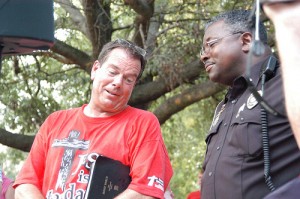 Today, 12 jurors in Charlotte, N.C., found anti-abortion extremist leader Philip “Flip” Benham guilty of criminally stalking a Charlotte-area physician who provides abortions. This is the second time Benham, who is director of the anti-abortion group Operation Rescue/Operation Save America, was convicted for conduct that caused persons to fear for their safety or the safety of their family.

“For too long, Benham and his organization have been able to stalk and terrorize abortion providers and their families with impunity,” said duVergne Gaines, legal coordinator for the Feminist Majority Foundation, who attended the five-day trial. “They have distributed WANTED posters and engaged in other outrageous conduct in an attempt to intimidate doctors out of providing safe, legal abortions for women here in Charlotte.”

He has not succeeded, but he and his followers have made daily functions harrowing, upping the ante since the election of a pro-choice U.S. president and the murder of [Wichita, Kans., abortion physician Dr. George] Tiller. Among other actions against incoming patients, Benham screams through a microphone at a decibel level so loud that he can be heard inside the clinic, ‘Satan [is] going to drink the blood of your babies!’

Moreover, Benham distributed Old West-style WANTED posters at doctors’ homes, neighborhoods and offices. In key testimony for the prosecution, a Charlotte police detective presented compelling details of how anti-abortion extremists have murdered doctors who were initially featured on such posters. “[That testimony underscores] the importance of prosecuting extremists to the full extent of the law in order to prevent threats from escalating to violence,” says Gaines.

We hope this verdict will encourage other district attorneys and the Department of Justice to prosecute extremists who, like Benham, are terrorizing abortion doctors across the country.

In addition to receiving the guilty verdict, the judge put forward a protective order preventing Benham from entering the residential community where the doctor lives or from coming within 500 feet of the doctor’s office and the two women’s health clinics where he performs abortions. Additionally, Benham is prevented from contacting the doctor and his family in any manner and from publishing WANTED posters or other materials (including web postings) that reference the doctor or his home or office address.

Benham has appealed the verdict, but the protective order will remain in force until the appeal is heard.

Photo of Flip Benham and a police officer from Flickr user marklyon under license from Creative Commons 2.0.