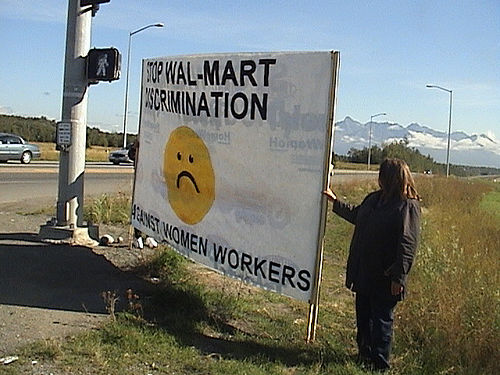 Isabel was paid only $2.00 per hour for her seven-hour shifts at a restaurant, and the owner confiscated her tips. He also made her and his other women employees purchase “schoolgirl” and “military girl” outfits to wear during night shifts. Elena’s supervisor made her sit on his lap and kiss him on the cheek when she asked him for time off to go the doctor for an injury she suffered at work, a large industrial laundromat. She had been pricked by a needle when handling soiled hospital sheets without any gloves or other protective gear.

These are not isolated incidents. Every day my civil rights organization, LatinoJustice PRLDEF, gets calls from women who are exploited, humiliated and regularly sexually harassed and abused by their employers and co-workers. Many of these women are low-income immigrants; some are undocumented.

It is rare for women like these to speak out because they are terrified that if their immigration status is discovered, they will be fired, or worse, that their families will be separated. Others are not even aware that they have the right to fight discrimination in the workplace, to earn the minimum wage and overtime pay in a safe workplace, or to report physical or sexual abuse regardless of their immigration status.

We have interviewed countless women seeking help for exploitative conditions at work. Usually when one worker is being discriminated against or exploited in a workplace, so are her co-workers. That is what makes the Supreme Court’s decision in Dukes v. Wal-Mart so disappointing.

In the case, Wal-Mart was accused of systemic sex discrimination against 1.5 million women employees. While the Court did not contest the allegations of unlawful and widespread gender bias, it ruled that the case could not go forward as a class action.

That is bad news for the 1.5 million women working at Wal-Marts across the country who will now have to pursue their cases individually or in smaller groups. It is even worse news for women with more limited access to legal representation, because the Court’s ruling will make it even harder for workers to challenge discrimination together.

This is particularly troubling for the most vulnerable workers: undocumented, immigrant women in low-wage industries. Women working long hours for illegally low wages are all around us. They take care of our children and our parents, clean our homes, wash hospital sheets at industrial laundromats and package perfume at factories. We rely on their labor.

The ones who seek help are among the bravest. Most stay silent in the shadows of the underground economy. For these workers, bringing claims together against their exploitative employers can provide additional protection from retaliation and can make it easier to prove their claims. The Supreme Court’s decision in Dukes v. Wal-Mart makes it harder for all workers, but especially the most vulnerable, to enforce their right to a discrimination-free workplace.

Elizabeth Joynes, Esq. is Coordinator of the Latinas at Work (LAW) Project for LatinoJustice PRLDEF. The LAW Project seeks to stop the exploitation of Latina immigrant workers on Long Island by working with partner organizations in the community.LatinoJustice PRLDEF, established in 1972, has won landmark civil rights cases in education, housing, voting, migrant, immigrant, employment and other civil rights.