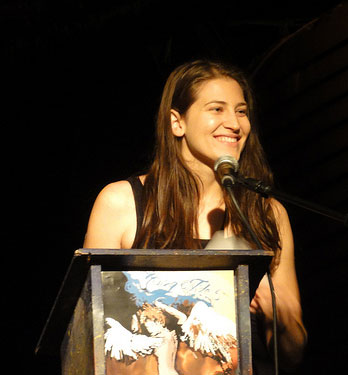 Human rights reporter Mac McClelland knew there would be controversy when she published her incredibly personal narrative last week, “I’m Gonna Need You to Fight Me on This: How Violent Sex Helped Ease my PTSD.”

“There’s a reason I almost threw up when this piece went live,” said McClelland, in an interview with the Ms. Blog. McClelland is disarmingly upfront and candid; the same signature authentic voice infused in her writing.

Appearing in GOOD’s online magazine, the essay details her battle with post-traumatic stress disorder after reporting in Haiti, bearing witness to horrific stories from rape victims and being threatened herself with sexual violence. Returning home, she and her therapist came to the conclusion that a way to move past her trauma was to have a violent–but controlled–sexual experience. Through therapy and a bedroom battle with an old boyfriend, McClelland found relief from the PTSD, and a way to bravely share her story with readers.

Most of the responses have been positive, thanking McClelland for speaking about the under-discussed issue of PTSD. In the wake of TV journalist Lara Logan’s rape, her address of the physical and emotional dangers to women journalists couldn’t be timelier. But she began to receive criticism as the week progressed, particularly for her portrayal of Haiti.

“There’s some sort of ridiculous Twitter war about whether I’m an insane racist narcissist who’s unfit to do my job,” said McClelland.

In Slate’s XX Factor story, “Mac McClelland: What’s Happening in Haiti Is Not About You,” for example, Marjorie Valbrun claimed that McClelland took a self-centric approach to Haiti’s plight. And 36 women journalists who have worked in Haiti wrote an open letter to GOOD saying, “We believe the way she uses Haiti as a backdrop for this narrative is sensationalist and irresponsible.”

Ms. spoke with McClelland, first about her response to the firestorm.

What is your reaction to the recent criticism?

Most discouraging is some of the stuff that these women are saying like, “If you can’t handle your shit go home. I work in Haiti and I never got PTSD.” Is it not valid for me to be upset, [having] been threatened with rape and seen someone else go through some extreme trauma [regarding rape]? People are saying I have a long history of mental illness. I have no idea what that’s based on.

It’s not an article, it’s an essay. I wrote a cover story [for Mother Jones]—that was my Haiti coverage. This was not my Haiti coverage; this was about me. In terms of the depiction of Haiti, none of those other journalists are denying that Haiti has a serious, serious rape problem. There are a lot of guns in Haiti–that is also true. And that’s pretty much the only thing I say about Haiti, other than my personal experience there with a couple of unfortunate and predatory men.

I knew that something was going to happen. I just didn’t know that a New York Times correspondent was going to be so ridiculous as to suggest [on Twitter] that because I had sex with a [French] peacekeeper I am a geisha for the NGO-industrial complex.

Do you think the response is different because you are a woman?

Nobody would be slut-shaming me [if I were a man]. If I were a man, I wouldn’t have had a driver who had lied to me and cornered me and threatened me. That does happen [to men], but the chances of that are a lot less.

And if that had happened to a man, people would be fucking horrified. No one would be like, “If he can’t handle getting threatened with possible rape then he should just stay home and become an interior decorator, because he obviously can’t do his job.”  This is not setting a good precedent for journalists, much less women journalists, to talk about [PTSD].

How did you decide to write the piece?

I think one of the worst things about PTSD is that nobody understands it. Honestly, for the last four days I’ve been getting emails every 10 minutes from people who have been diagnosed with PTSD. When I was going through this, if I had been able to read something like [what I wrote], it would have made me feel less alone. This conversation needs to be happening. I’m a writer. I can’t really sit around and say, “I wish someone else was writing about this, [but] I’m too much of a coward to deal with the consequences.” I kind of felt like I had to.

The other issue brought up about your piece is how you used violent sex to cope with the “rapemares” you were having. Did your therapist have any concerns about that?

That conversation [with my therapist] happened exactly the way I described it. I was like, “All I want to do is have incredibly violent sex,” and she didn’t even blink. It’s like I had said, “You know, I would really like a piece of toast.” [This desire] is incredibly common. Trauma affects all aspects of your life, [including] your sex life. The two are super linked. Everybody’s different, but in my case, [I moved] toward the thing that was traumatizing [me]. You sort of have to embrace the thing of your nightmares to process and move past it.

[And] is it even weird anymore to have rough sex? It was a little bit of an extreme version, and the need for it was kind of extreme. But the fact that people are like, “This is nuts!” is actually a little surprising to me. They’re acting like there were … circus animals involved.

So your intent was to discuss the issue of PTSD, but it seems many were more struck by the violent-sex aspect. Was that surprising for you?

I know how people are about sex, and I know how people are about women writing about sex–people hate when women write comfortably about sex. [In my case], especially, because it’s so far outside of my wheelhouse: I write about genocide and politics. If you’re a [woman] and you write about sex, you can be a sex writer, [but] you can’t be both. I knew that people were going to latch onto the sex thing. My hope was that more people were going to talk about the fact that PTSD is very, very serious and is not acknowledged enough.

How do you plan on continuing this conversation?

This won’t be the last thing that I write about this particular issue. It’s going to take more than Slate putting my face on their front page, connected to an article that says I’m a whiny racist narcissist, to deter me from writing about this, because I think it’s important. The fact that people are having that response just proves even more how important it is.