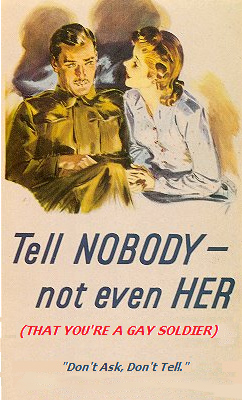 In response to a suit filed by Log Cabin Republicans, a three-judge panel of the U.S. 9th Circuit Court of Appeals ruled today in San Francisco that the U.S. should immediately stop enforcing the 18-year-old “don’t ask, don’t tell” policy that excludes gay and lesbians from the military. The court order, which lifts a previous stay, blocks the Pentagon from discharging soldiers based on their sexual orientation. This ruling is expected to speed up the demise of the policy, which was repealed by Congress last year.

The Pentagon said it would comply, and that by Friday the chiefs of the military services will submit recommendations on how to implement the repeal to Defense Sec. Leon Panetta. Once the Pentagon certifies that the repeal won’t affect military readiness, it will have 60 days to put a new policy into action.

As the court decision [PDF] points out,

The process of repealing [don’t ask, don’t tell] is well underway, and the preponderance of the armed forces are expected to have been trained by mid-summer. The circumstances and balance of hardships have changed, and appellants/cross-appellees can no longer satisfy the demanding standard for issuance of a stay.

Interestingly, the court quoted the July 1 Golinski decision, also by the 9th Circuit, in which the Department of Justice successfully argued against the Defense of Marriage Act, declaring that sexual orientation should be subjected to “heightened scrutiny.” It took just five days for that decision to resonate, certainly a gratifying sign for equal-rights watchers eager to see both DADT and DOMA on the fast track to their demises.