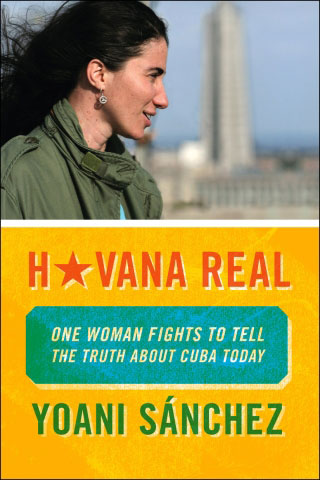 As a lefty progressive and a child of Cuban exiles, I’ve always been privy to two dominant narratives about Cuba. From family members who were forced to leave for political and economic reasons after Fidel Castro’s rise to power, I have heard the very typical anti-Castro perspective of Cubans in the U.S. My family mythology was shaped by exile and loss; by the livelihood that was left behind and then torn from our fingers forever by the Cuban Revolution.

The other narrative I’ve encountered about Cuba has been a stark contrast to my family’s personal disdain for the revolution, steeped in the palpable losses they endured. From the lefty, radical activists I associate with, I hear instead what feels like a knee-jerk and cursory support for the Cuban Revolution, sometimes simply as a way of denouncing American capitalism. That perspective always felt alienating to me, based on idolization of Che Guevara and alternative politics rather than reality.

What Cuban blogger Yoani Sánchez‘s just-published Havana Real: One Woman Fights to Tell the Truth About Cuba Today provides is, finally, a third narrative. It’s the only one I have come across in recent memory that is grounded in what is actually happening in Cuba today. Thanks to online technology, proxy web hosts and sheer perseverance, political bloggers such as Sánchez have thwarted the great Cuban censorship machine that tightly controls information leaving the island. Through her blog, her Twitter feed and now this book-length compilation of her posts (published by Melville House), Sánchez is finally able to communicate what it is actually like to live in Cuba today–something none of my family members and few of the radical left in this country truly understand.

I approached Sánchez’s book with as open a mind as possible considering my own relationship with Cuba, an island I have never visited but that has always been in the backdrop of my life. What I found in those pages was extremely sad and disheartening. I think part of me, for political reasons, wanted to believe that maybe some of the positive impacts of the revolution might be real, despite the nay-saying of the Cuban community in the U.S; that some of the losses my own family endured had at least created a more equitable Cuba.

Sánchez is just one person, but her story compels belief. If she were not documenting the Cuban reality, why would the government try so hard to censor her simple blog? Sánchez relates being followed and constantly harassed by authorities for refusing to stop her transmissions to the blogosphere, and eventually kidnapped and beaten by plainclothes police. Unable to access her own blog in Cuba due to government censorship, Sánchez must email her blog posts to people abroad who then post (and translate into countless languages) her missives. Twitter allows her to send real-time updates via SMS.

It is in some ways remarkable that the person finally pushing through the censorship barrier–and receiving countless international journalism awards for doing so–is a woman. Sánchez is one of many among a nascent community of bloggers, but she has stood out and reached a wide and international audience. Throughout the book, Sánchez addresses the sexism and machismo of her government, one almost entirely run by men.

The Cuban reality she portrays is abysmal. Hunger is a constant presence and has been since the fall of the Soviet Union ended subsidies to Cuba. Because government-provided food rations are limited, everyone relies on the black market to survive. Even the barest essentials, like soap, would be impossible without it.

The health-care system, perhaps the most-lauded aspect of Cuban society today, requires that patients bring all of their own supplies to the hospital with them–from sanitizer to pillowcases to suture thread for surgeries. The idea of access for everyone disappears amidst the serious economic woes and widespread corruption that plagues the island. The education system, another much-praised result of the revolution, is revealed by Sánchez to be ideologically fraught, with grading systems replaced by rewards and promotions given to the students most willing to toe the party’s ideological line. Even the simplest acts we take for granted each day, like the ability to receive mail or travel abroad, are entirely politicized or obstructed in today’s Cuba.

What is of course incredible about Cuba is that a one-man government (which in recent years only sort of expanded to include Fidel’s brother Raul) has persisted all these years. It is clear that the system is not working, not benefiting the Cuban people and no longer even pretending to create the utopia that existed in the eyes of the Revolutionaries and their supporters over half a century ago. As the world around Cuba moves forward in time, technology remains the greatest hope for change on the island. That is clear in Sánchez’s commitment to her underground form of journalism and the risks she takes each day to spread the blogging revolution to others in her country. Perhaps the greatest hope for Cuba exists in the simple fact that Sánchez, a seriously disillusioned child of the revolution, chooses to stay there and pressure for change from within, while so many others choose to flee.

Miriam Zoila Pérez is an Editor at Feministing.com and the founder of Radicaldoula.com. Read more about her work at miriamzperez.com.