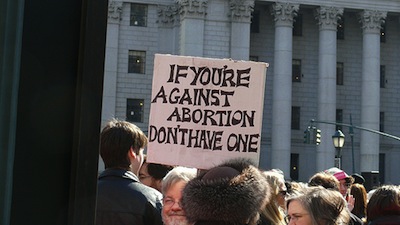 When last we spoke to New York City Council member Jessica Lappin, she felt confident that the truth-in-advertising bill she successfully proposed–which requires crisis pregnancy centers (CPCs) to disclose whether they have licensed medical staff, among other things–would stand up to legal challenges. Unfortunately, Round One has gone to the CPCs, as federal judge William Pauley has blocked the law, which was supposed to go into effect Thursday.

CPCs are notorious for misleading patients to think that they’re real medical clinics, when their sole purpose is to dissuade women from having abortions. They are also known for providing false information about contraception and abortion. A report from NARAL in 2008 [PDF] highlights the shocking actions and misinformation for which CPCs are responsible.

Pauley ruled that the language in the law was vague and potentially unconstitutional. His reasoning parallels that of a Baltimore ruling earlier this year, in which the judge struck down a similar bill because it violated the First Amendment rights of the clinics.

“This does not impact free speech,” said Lappin previously. “In this country, you have the right to believe and say whatever you like, but you do not have the right to do it while wearing scrubs in a room that looks like a medical facility.”

The ruling will likely be appealed. Meanwhile, Rep. Carolyn Maloney (D-N.Y.) and Sen. Robert Menendez (D-N.J.) have reintroduced the “Stop Deceptive Advertising in Women’s Services Act,” which would empower the Federal Trade Commission to investigate CPCs that deceptively advertise their services in a way that implies they provide abortions. (The New York bill, in comparison, required such clinics to post a sign disclosing the limited nature of what they provided.) Said Maloney, who first introduced the Act in 2006 and subsequently in the last two Congresses as well:

Although I may disagree with their views, many crisis pregnancy centers are forthright and respectful–but some take a more underhanded approach to lure in women seeking abortions by using deceptive tactics that should be made illegal, and that’s what this bill would do.