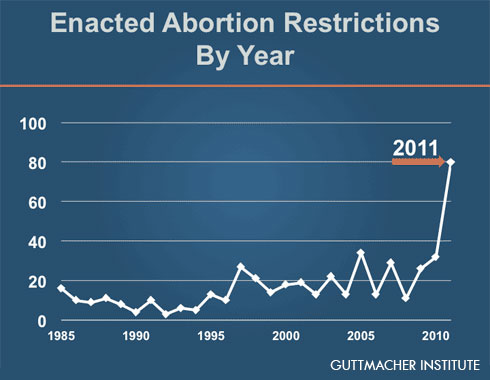 2011 has not been a good year for reproductive rights. A recent report by the Guttmacher Institute shows us just how unprecedented the current attack on abortion rights truly is. In the first six months alone, states enacted 80 new laws limiting a woman’s access to a safe abortion. That’s over three times the number of restrictions passed in 2010 and more than twice the previous record of 34 new limitations in 2005.

Guttmacher explains that the 80 laws are “a mix of old and new strategies to curb access to abortion care.” Some involve bans on funding or on abortion after a certain gestation period (some as early as six weeks), while others use less direct methods, such as forced waiting periods and obligatory ultrasounds.

2011 was the first time states attempted to limit access to the abortion pill, mifepristone, for very early pregnancy. Kansas and Oklahoma sought to even further restrict the time period during which a woman can take abortion pills. Five states banned the use of teleconferencing as a means to council and prescribe abortion medication to women in inaccessible rural areas.

The graph doesn’t even begin to cover the huge threats to other family planning services that have passed this year. “For the first time in recent memory, state legislatures devoted significant attention to issues related to family planning in 2011. Much of this came in the context of state budget bills,” Guttmacher wrote in its release of the study.

We knew 2011 felt like a new surge in anti-woman legislation, but the recent Guttmacher report shows just how strong the new torrent has been. Is it too soon for a New Year’s Resolution? Reinstate women’s legal rights.