The States' War on Women - Ms. Magazine
Skip to content 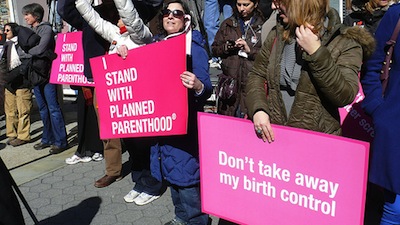 In recent months we’ve become well aware of how U.S. House Republicans are trying to decimate services of vital importance to women. Don’t take your eyes off your local statehouse, though: There, legislators have pushed the war on women equally far, cracking down on reproductive rights and cutting funding for education and health programs that largely benefit women and children.

Under the guise of deficit reduction, lawmakers argue that the cuts are necessary, all the while preserving tax breaks for corporations and the rich. In Florida, for example, Republican Gov. Rick Scott has sought to repeal the corporate income tax—despite vetoing more than $615 million from the state budget in May, slashing both public education and health services for women and children. Reductions in health care and social services, though ostensibly affecting everyone, have an inordinately negative impact on women, who comprise a majority of the public-service workforce—nurses, teachers and social workers—and depend more than men on public services such as Medicaid, family planning and community colleges.

In Texas, the Republican-dominated Legislature trimmed more than $15 billion from current spending, making the largest cuts to health and human services and education. Public and higher-education funding was all but gutted for the next two years, a decision that could spell disaster for Texas women, who constitute nearly 4 out of 5 public-school employees in the state.

Pennsylvania has seen similar cuts to education, with Gov. Tom Corbett proposing a $1.6 billion decrease in state funding. Corbett also called for a public-school-employee wage freeze, and sought to make it easier to furlough teachers. Those decisions have already led to more than 1,000 teacher layoffs, currently being challenged in courts.

Conservative state legislators have also introduced more than 1,000 pieces of anti-choice legislation since January, according to the Guttmacher Institute. In Florida, the state Legislature brought up 18 bills that attempted to tighten abortion laws, and several of the controversial measures passed. One requires women to receive an ultrasound before undergoing an abortion; another prohibits private insurers in the state exchange (which will be set up under federal health-care reform) from offering abortion coverage.

In South Dakota, the state House passed a measure requiring those seeking an abortion to first visit a crisis pregnancy center (CPC), where women will be required to obtain a list of agencies that would help her keep and raise her baby. CPCs are largely religious or ideologically based anti-choice outlets that have been known to disseminate false and deceptive information regarding abortion, while usually offering no real medical services.

The Ohio House has recently passed three draconian anti-abortion bills, including one that would criminalize abortions as soon as a fetal heartbeat can be detected—which can be at six weeks of pregnancy. The second bill (which has now passed the Senate) would prohibit abortions after 20 weeks if the fetus could survive outside the womb; the third, as in Florida and 12 other states, would disallow abortion coverage from private health insurers under federal health-care reform, even if women paid for it.

In Virginia, abortion clinics might soon close at an alarming rate, due to legislation requiring they be regulated like hospitals. The measure forces the state’s 21 clinics to meet rigorous standards—such as wide hallways and tall ceilings—that aren’t required of other medical practices that perform invasive, and often more dangerous, medical procedures.

“Dental surgery, colonoscopies (which have very high complication rates), Lasik surgery, plastic surgery…all are invasive procedures that don’t have to meet those regulations,” says Jessica Honke of Planned Parenthood Virginia. “Ultimately, this was a decision based on politics and not one that will improve the health and safety of women.”

The three remaining abortion clinics in Kansas, too, are threatened with closure because of unnecessarily stringent new licensing rules that require additional equipment and remodeling. Inspectors went into the clinics just three days after the rules were issued, leaving no time to make changes.

Also, six states have essentially prohibited funding for Planned Parenthood. One of the them, Indiana, voted to block patients from using Medicaid at Planned Parenthood clinics. The health-care provider already doesn’t get any federal funds for abortion procedures–a fact that conveniently eludes many Republican lawmakers–but blocking funding for the rest of its services, used by about 9,300 Indiana Medicaid patients annually, could be devastating for low-income women’s access to preventative health care, STD testing and Pap smears.

So far, the Obama administration has rejected Indiana’s request to block the Medicaid payments, and a federal judge has issued a preliminary injunction against the law. However, “If we are unsuccessful in eventually getting a permanent injunction [against the law], those 9,300 patients would remain without their preferred provider and what has become to them a medical home,” says Planned Parenthood Indiana President Betty Cockrum. Eight of the 28 Planned Parenthood centers in Indiana would be likely to close due to loss of patients and revenue. And the state will lose money in the long run: Every $1 cut to family-planning services ends up costing the state about $4.

According to the Evansville Courier & Press, Indiana Rep. Sue Ellspermann said that those affected by Medicaid cuts could simply go to CPCs for their reproductive health-care services.

“CPCs typically do not have licensed health-care providers on location,” says Cockrum. “Crisis pregnancy centers are certainly in better favor with Indiana legislators than the largest provider of preventative health-care services, Planned Parenthood. We actually do some good for patients. It’s hard not to be angry.”