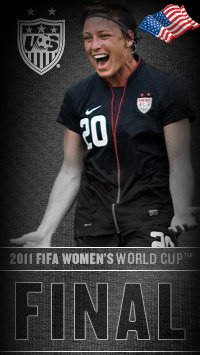 As the FIFA Women’s World Cup ended on July 17 with a stirring, nail-biting  victory by Japan over the USA, we can celebrate a triumph for women athletes everywhere. The matches were beautifully and excitingly fought, as we watched the deft touch of Brazil’s Marta, the unstoppable force of the USA’s Abby Wambach … sports fans of all genders have been mightily impressed.

But that’s how women athletes roll on the field. Off the field, they’re unfortunately fair game for certain media that want to de-athleticize and hyper-sexualize them. The respect for their muscularity and skill takes a backseat to how they look in a bikini, a wet T-shirt–or nothing at all.

Some of the world’s best women soccer players were not immune to the siren call to overexpose themselves this summer.

First, five women from the German team appeared scantily clad in pornified poses for the German edition of Playboy. Said German player Kristina Gessat, “With these photos, we want to disprove the cliche that all female footballers are butch.”

Then, three of the top French players posed naked for the German tabloid Bild. Their picture was captioned, “Is this how we should show up before you come to our games?“

Of course women athletes don’t have to participate in this charade. But aside from the bait of financial rewards and commercial appeal that could be garnered from their, er, exposure, many women athletes still feel the need to “apologize” for the ways that they turn “traditional” femininity on its head.

The idea of a feminine “apologetic” in sports was first broached by physical education professor Jan Felshin in 1974. As Jennifer L. Knight and Traci A. Giuliano explain it in the Journal of Sport Behavior,

Because being a successful athlete contradicts a woman’s prescribed societal gender role, the media often employs a ‘feminine apologetic’ whereby female athletes are required to overcompensate for their masculine behavior on the field by acting in traditionally feminine ways off the field. Because femininity is often used as a proxy for heterosexuality, the media can implicitly or covertly ‘assure’ their audience that female athletes are heterosexual through coverage and photographs that portrays these women in a ‘heterosexy’ manner.

Women athletes don’t overtly say “I’m sorry” for being jocks; they just slather on the lipstick, shorten and tighten up the skirts, heighten the heels, lower the cleavage, stick out their asses and put on a bikini–even if they’re not swimmers or beach volleyball players (yes, I’m talking about you, Serena Williams and Danica Patrick, among oh-so-many others). They flaunt their boyfriends or husbands or kids, and throw out the word “feminine” as often as possible. They do everything but break into “I Enjoy Being a Girl” to prove that, despite how hard they play, they’ve still got XX chromosomes and have sex with men.

Let’s face it, sexed-up photos of women athletes are for the heterosexual male gaze. I try to imagine what such pictorials would look like if, say, they were conceived for a lesbian gaze (or for men, straight or gay, who don’t need the apologies). The athletes wouldn’t be wearing so much makeup. They wouldn’t have to push out their breasts or their asses or spread their legs to draw attention. They wouldn’t be wearing stilettos. And they’d be sweating for real, not just looking like they’d been sprayed with mist.

I’m glad that the USA team didn’t fall into the apologetic trap this year. Au contraire, they have an openly gay coach, Pia Sundhage (even if there aren’t any out players on the squad as there have been in the past). Sundhage’s openness should be seen as necessary and courageous during a World Cup in which the overt homophobia of Nigerian head coach Eucharia Uche was exposed and decried.

But the issue here isn’t just about sexual orientation–it’s about women being all they can be and not having to then say “I’m sorry.” Women athletes proving their  “femininity” is often code for proving that they’re straight, but apologetic behavior regulates all women into a narrow spectrum of gender-acceptable behavior.

I don’t think the USA players are buying it. Goalkeeper Hope Solo may wear eye makeup and keep her hair long, but she’s as steely as it comes. No apologies. And tall, short-haired scoring hero Abby Wambach may proudly flaunt a handsome, androgynous look, but her talent and obvious confidence stills any gender-regulating voices that would dare speak against her. No excuses, no apologies.

The world showed up to watch the USA take on Japan even though the women were fully clothed; the thrill of a great sporting event trumps sexism. But even if a player had decided to strip down to her sports bra after scoring the winning goal, that would have been OK, too.

Photo of poster with Abby Wambach from Flickr user andsenal under license from Creative Commons 2.0